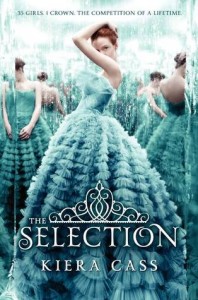 Publication Date: April 24, 2012 | Series: Selection – Trilogy
For thirty-five girls, the Selection is the chance of a lifetime. The opportunity to escape the life laid out for them since birth. To be swept up in a world of glittering gowns and priceless jewels. To live in a palace and compete for the heart of gorgeous Prince Maxon.
But for America Singer, being Selected is a nightmare. It means turning her back on her secret love with Aspen, who is a caste below her. Leaving her home to enter a fierce competition for a crown she doesn’t want. Living in a palace that is constantly threatened by violent rebel attacks.
Then America meets Prince Maxon. Gradually, she starts to question all the plans she’s made for herself—and realizes that the life she’s always dreamed of may not compare to a future she never imagined.

Kiera Cass is a graduate of Radford University and currently lives in Blacksburg, Virginia, with her family. Her fantasy novel the siren was self-published in 2009. Kiera has kissed approximately fourteen boys in her life. None of them were princes.

America Singer has been thrown into a reality television show to win the hand and heart of Prince Maxon. Living in a post third world war country that was once the United States. society has been divided between the haves and the have nots and broken down further into a caste system.  This story is actually closer to truth than fiction right now.  We have the class warfare, the war on women, and people who still go to bed hungry.  It scares me.  So throw in a bit of reality television like the Bachelor and it can get very intense quickly.  America is exactly the sort of anti hero that I have come to adore.  She is outspoken, tells the truth (mostly) and is trying to find her way in a society where she has limited options.  Her family will be paid for her entering this game show where she might end up with the prince and thus her family will be able to eat and have warmth. So in a Survivor like fashion, she wants to stay in the game as long as possible.

I know, I know, everyone has been equating this story as a cross between The Bachelor and the Hunger Games.  I admit there are some similarities like the dystopian world of the Hunger Games and people starving, class warfare, haves versus have-nots and the like while bringing in the reality television version of The Bachelor.  Even if you are like me and never really watched those back stabbing television b*tches, you will know exactly what I am talking about if you survived junior high.  There are devious girls, like Celeste,  who will stop at nothing to attain the prize of the Prince.  Then there are others like Marlee, who aren’t quite as obvious.  Prince Maxon, for all his worldliness, is not quite the player and has some really bad self esteem issues.  I think there is more to him than what is in the book so far and wonder how he will be developed.


And just for fun, there is a wonderful love triangle between America’s first love, Aspen, who is now back in the picture as a palace guard.  That plot points seems a bit too convenient for me and again it will be interesting to see where this story line ends up in the next installment of this trilogy.  Overall, there is not much for parents to worry about in this story since it just includes some kissing since there are regulations about most aspects of life.  I only remember alcohol discussed in a few instances, some discussions of violence (a boy is whipped for stealing food) and really not much else.  I really can’t wait until the next one is released.