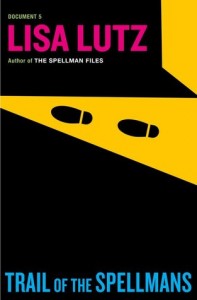 FOR THE FIRST TIME in Spellman history, Isabel Spellman, PI, might be the most normal member of her family. Mom has taken on an outrageous assortment of extracurricular activities—with no apparent motive. Dad has a secret. Izzy’s brother and sister are at war—for no apparent reason. And her niece keeps saying “banana” even though she hates bananas.

That’s not to say that Izzy isn’t without her own troubles. Her boyfriend, Henry Stone, keeps wanting “to talk,” a prospect Isabel evades by going out with her new drinking buddy, none other than Gertrude Stone, Henry’s mother.

Things aren’t any simpler on the business side of Spellman Investigations. First, Rae is hired to follow a girl, only to fake the surveillance reports. Then a math professor hires Izzy to watch his immaculate apartment while he unravels like a bad formula. And as the questions pile up, Izzy won’t stop hunting for the answers—even when they threaten to shatter both the business and the family.

About the Author
Lisa Lutz is the New York Times bestselling author of The Spellman Files and Curse of the Spellmans, a nominee of the 2008 Edgar Award for Best Novel. She is most recently the coauthor ofHeads You Lose, written with David Hayward.

Source:  Amazon Vine
MY THOUGHTS
LOVED IT
I adore the Spellmans and in this latest installment, they are back to their homespun wackiness where no one trusts anyone as far as they can throw them.  The story skips back and forth between the family members, each having their own issues.  Mrs. Spellman suddenly throws herself into a whirlwind of acitivities.  David is now a stay at home dad whose daughter refers to everything as “banana”.  Rae is in college and still working part time for the family, but has lost her interest.  She does develop feelings for a boy whom she treats with little regard.  Isabel is on and off with Henry and finds she has more in common with his mother lately.  Her father has taken on several questionable cases.
It really sounds like none of these things should go together, but Lutz weaves them all with humor and sarcasm.  This is the first book in the series I couldn’t sit down and read straight through.  I had read that the author wasn’t feeling the series anymore and I think it shows a bit.  I did laugh out loud quite a bit and felt this would be a good book to end the series on since most major issues are tied up neatly.  I will miss the family, well, at least until I find out there is another book on the way!