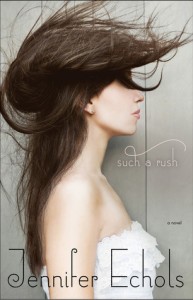 Book Description
A sexy and poignant romantic tale of a young daredevil pilot caught between two brothers.High school senior Leah Jones loves nothing more than flying. While she’s in the air, it’s easy to forget life with her absentee mother at the low-rent end of a South Carolina beach town. When her flight instructor, Mr. Hall, hires her to fly for his banner advertising business, she sees it as her ticket out of the trailer park. And when he dies suddenly, she’s afraid her flying career is gone forever.     But Mr. Hall’s teenage sons, golden boy Alec and adrenaline junkie Grayson, are determined to keep the banner planes flying. Though Leah has crushed on Grayson for years, she’s leery of getting involved in what now seems like a doomed business — until Grayson betrays her by digging up her most damning secret. Holding it over her head, he forces her to fly for secret reasons of his own, reasons involving Alec. Now Leah finds herself drawn into a battle between brothers — and the consequences could be deadly.


About the Author
Jennifer Echols was born in Atlanta and grew up in a small town on a beautiful lake in Alabama—a setting that has inspired many of her books. She has written eight romantic novels for young adults, including the comedy MAJOR CRUSH, which won the National Readers’ Choice Award, and the drama GOING TOO FAR, which was a finalist in the RITA, the National Readers’ Choice Award, and the Book Buyer’s Best, and was nominated by the American Library Association as a Best Book for Young Adults. Her next two teen dramas, including SUCH A RUSH, will appear in 2012 and 2013, with her adult romance novels debuting in 2013, all published by Simon & Schuster. She lives in Birmingham with her husband and her son. Please visit her online at http://www.jennifer-echols.com.

SOURCE:  AROUND THE WORLD ARC TOURS
MY THOUGHT
ABSOLUTELY LOVED IT
All I can say is WOW.  This story tackles some difficult subjects like bullies, teen pregnancy and living with little or no means.  It is just amazing!
Leah has grown up in a somewhat abusive childhood.  Her single mother is kicked out of the family home when she discovers she is pregnant at sixteen.  Barely surviving, the pair move continuously when her mother can’t pay rent or can’t find a boyfriend to support her.  She learns that the only one she can depend on is herself and so when they move to a trailer park at the end of a small airport, Leah finds a way to support herself working in the small office.  She also discovers that she wants to learn how to fly.  She saves her money, demands lessons from a pilot, forges her mother’s signature and takes off, both literally and figuratively.
She also finds a family, something she has never really had.  When Mr. Hall dies and leaves his twins control of his banner flying company, Leah is thrown off course.  Her mother has little to do with her and she likes it that way.  Fiercely independent, she makes herself bigger than she really is to protect herself from the bullies at school who treat her like trailer trash.  All except Molly, who at times treats her like her own charity case. The two develop a friendship that Leah comes to depend on, although she doesn’t tell Molly the depth of her despair and exactly how bad her home life is.  The twins are another story:  Grayson is more dominate and believes that Leah was sleeping with his father to get her pilot’s license while Alec just seems a bit lost.
There are a lot of manipulating factors around Leah, while she just tries to keep her head down and survive.  I connected with all of  the characters in the story, especially Leah.  At times, her story was just heartbreaking and then she would come back and fight.  You could feel her highs and lows. The dialogue just flowed so naturally through out the whole thing.  I loved Echols previous work but this one is just spectacular for it’s depth and emotion.  There are mentions of sexual situations, alcohol use and some language.  This is best suited for older teens.  So obviously, I am not going into real depth here, this is a story that everyone should read.