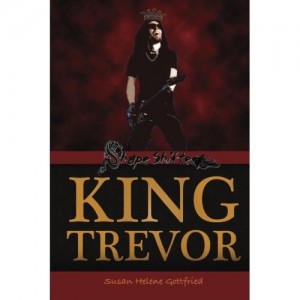 Sooo — What happened to Trevor after he collapsed on stage? Did he live or die?  Why is he now KING Trevor?  In the afterlife?  And what the heck does Kerri have planned?  Dude, I need to know NOW!  My favorite rock star is back again!

I highly recommend this latest installment of The Demo Tapes.

I would buy this one directly from the author, since Susan will personalize it for it.

Check out WEST OF MARS  for more information.

The aftermath of his onstage collapse has taken its toll on Trevor Wolff. He’s become a virtual shut-in, dependent on the people around him to help in his healing. To make matters worse, he might have hung up his bass for good. This is not the Trevor Wolff way. When Mitchell hatches a plan to turn Trevor into the official King of ShapeShifter, it sounds like bunk. However, when Mitchell finds the perfect building to repurpose, the Big Idiot hires the best architect around—the brother-in-law he’s never met. Trevor can’t help but smell secrets that awaken the person he used to be. After all, there’s nothing Trevor Wolff likes more than intrigue—except maybe a chance to square off against his arch-nemesis: Mitchell’s wife, Kerri.

About the Author
Susan Helene Gottfried is the author of ShapeShifter: The Demo Tapes — Year 1, ShapeShifter: The Demo Tapes — Year 2, Trevor’s Song, and ShapeShifter: The Demo Tapes — Year 3. She can be found online at http://westofmars.com, where you can find The Meet and Greet, among other goodies. A tone-deaf rocker-at-heart, Susan worked in retail record stores, in radio stations, as stage crew, and as a promoter while earning two college degrees in creative writing. Susan walked away from a continued career in the music industry in order to write books, so it makes sense that most of her fiction revolves around rock bands. Once you get those record stores, radio stations, and fellow roadies and promoters under your skin, they never leave. To fill her time, Susan takes on freelance editing work from various clients.