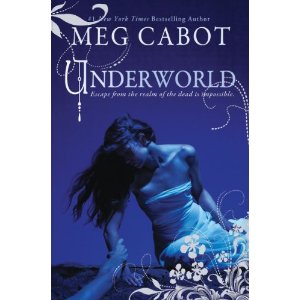 But she is being held against her will in the dim, twilit world between heaven and hell, where the spirits of the deceased wait before embarking upon their final journey.

Her captor, John Hayden, claims it’s for her own safety. Because not all the departed are dear. Some are so unhappy with where they ended up after leaving the Underworld, they’ve come back as Furies, intent on vengeance . . . on the one who sent them there and on the one whom he loves.

But while Pierce might be safe from the Furies in the Underworld, far worse dangers could be lurking for her there . . . and they might have more to do with its ruler than with his enemies.

And unless Pierce is careful, this time there’ll be no escape.

Meg Cabot was born on February 1, 1967, during the Chinese astrological year of the Fire Horse, a notoriously unlucky sign. Fortunately she grew up in Bloomington, Indiana, where few people were aware of the stigma of being a fire horse — at least until Meg became a teenager, when she flunked freshman Algebra twice, then decided to cut her own bangs. After six years as an undergrad at Indiana University, Meg moved to New York City (in the middle of a sanitation worker strike) to pursue a career as an illustrator, at which she failed miserably, forcing her to turn to her favorite hobby–writing novels–for emotional succor. She worked various jobs to pay the rent, including a decade-long stint as the assistant manager of a 700 bed freshmen dormitory at NYU, a position she still occasionally misses.

She is now the author of nearly fifty books for both adults and teens, selling fifteen million copies worldwide, many of which have been #1 New York Times bestsellers, most notably The Princess Diaries series, which is currently being published in over 38 countries, and was made into two hit movies by Disney. In addition, Meg wrote the Mediator and 1-800-Where-R-You? series (on which the television series, Missing, was based), two All-American Girl books, Teen Idol, Avalon High, How to Be Popular, Pants on Fire, Jinx, a series of novels written entirely in email format (Boy Next Door, Boy Meets Girl, and Every Boy’s Got One), a mystery series (Size 12 Is Not Fat/ Size 14 Is Not Fat Either/Big Boned), and a chick-lit series called Queen of Babble.


SOURCE:  AROUND THE WORLD ARC TOURS


MY THOUGHTS
LOVED IT


John Hayden has taken Pierce back to the Underworld to keep her safe from her crazy grandmother who it turns out has been taken over by a Fury and wants to kill her.  If you remember the story of Persephone and Hades, you know the girl should have never eaten there since that is what kept her in hell with Hades – maybe.  Yes, she ate since she was famished but Pierce feels there is more to this myth than John is letting on.  She is settling into her life in the Underworld, deciding that if she is stuck there she might as well make the best of a bad situation.


That is all well and good until she finds her cell phone and sees a mysterious video from her cousin Alex.  She begs John to take her back home so she can rescue him from certain death.  There are several murky little details that make up this mystery in the latest installment of Abandon.  I like the characters and thought this was a fun read but parts of the plot seemed a bit predictable and convenient to carry the story forward.  Even though the storyline depends on Alex, he doesn’t really make an appearance until the last part of the book.


Which brings me to Kayla – my favorite – and is only briefly brought out.  I missed her snarky little comments so much.  This one left me with a few questions that beg answers.  I wonder if Pierce figures out exactly how she can exist in both worlds, if she finds herself still in love with John, even though I find him a bit creepy and if her grandmother is ever released from the Furies.  Overall, this is a fun little series and a quick read.  The minor characters are very fun in a pirate kind of way.  Yes, you have to read the book to get those details and the exact plot.