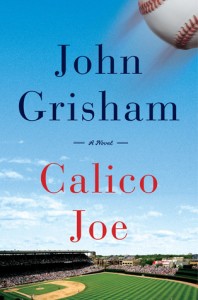 BOOK DESCRIPTION
A surprising and moving novel of fathers and sons, forgiveness and redemption, set in the world of Major League Baseball…  Whatever happened to Calico Joe?      It began quietly enough with a pulled hamstring. The first baseman for the Cubs AAA affiliate in Wichita went down as he rounded third and headed for home. The next day, Jim Hickman, the first baseman for the Cubs, injured his back. The team suddenly needed someone to play first, so they reached down to their AA club in Midland, Texas, and called up a twenty-one-year-old named Joe Castle. He was the hottest player in AA and creating a buzz. In the summer of 1973 Joe Castle was the boy wonder of baseball, the greatest rookie anyone had ever seen.  The kid from Calico Rock, Arkansas dazzled Cub fans as he hit home run after home run, politely tipping his hat to the crowd as he shattered all rookie records. Calico Joe quickly became the idol of every baseball fan in America, including Paul Tracey, the young son of a hard-partying and hard-throwing Mets pitcher. On the day that Warren Tracey finally faced Calico Joe, Paul was in the stands, rooting for his idol but also for his Dad. Then Warren threw a fastball that would change their lives forever… In John Grisham’s new novel the baseball is thrilling, but it’s what happens off the field that makes CALICO JOE a classic.

About the AuthorJOHN GRISHAM is the author of twenty-four novels, one work of nonfiction, a collection of stories, and two novels for young readers. He lives in Virginia and Mississippi.


There is no crying in baseball.  That phrase has been uttered thousands of times in my lifetime.  I grew up around baseball, my son played baseball and I have been hearing that phrase forever.  This story about family and redemption    with roots in baseball that will have you trying not to get too emotional but still tearing up like a Hallmark special.  The story revolves around Paul Tracey, both as a child and adult, his father Warren Tracey, who hits the up and coming star of the Chicago Cubs by the name of Joe Castle, nicknamed Calico Joe from his home town and takes him out of the game.  Warren is a mean man, both to his family and other players, but whether the pitch hits Joe intentionally or not is really not the point on this story.  It is about one moment that forever changes the lives of three men.  Paul, like the rest of America, worships the rookie and his father, Warren is a bit jealous, so when Joe is hit by one of Warren’s pitches and takes him out of the game forever, the world turns against him and takes him even further into his bitterness.

When Paul finds out his estranged father is dying and that he has never shown remorse for hitting Joe, he tries to reconnect with his father and make amends.  The story covers over 30 years through flashbacks of why Warren has so much hate inside him and the history of this makes some of his actions more understandable.  I loved how Grisham weaved baseball lore throughout the story and it felt so natural that I truly believed Calico Joe existed.  I think this should appeal to young adults and especially right now since it is the start of baseball season.  I can really see this one as a movie since the author has that rare talent of making you visual each scene through his economy of words.

WANT TO WIN A COPY OF THIS BOOK?
Complete the below form

Contest is open to anyone over 13 years old with a US or mailing address (sorry, no PO Boxes)
Contest ends on 4.23.12 Winner will be chosen by Random.org on 4.24.12
Winner will have 48 hours to respond to email or a new winner will be chosen.
This giveaway is sponsored by DOUBLEDAY PUBLISHING  and TWO copies are available.