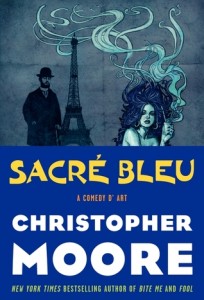 
It is the color of the Virgin Mary’s cloak, a dazzling pigment desired by artists, an exquisite hue infused with danger, adventure, and perhaps even the super natural. It is . . . Sacre’ Bleu
In July 1890, Vincent van Gogh went into a cornfield and shot himself. Or did he? Why would an artist at the height of his creative powers try to take his life . . . and then walk a mile to a doctor’s house? Who was the crooked little “color man” Vincent claimed was stalking him? And why had Vincent recently become terrified of a certain shade of blue?
These questions confront baker-turned-painter Lucien Lessard and bon vivant Henri Toulouse-Lautrec as they seek the truth of their friend’s untimely death, a quest that will lead them on a surreal odyssey through late 19th-century Paris.
A delectable confection of intrigue, passion, and art history—with can-can girls, baguettes, and fine French cognac thrown in for good measure—Sacre’ Bleu is another masterpiece from the one, the only, Christopher Moore.
Absolutely nothing is sacred to Christopher Moore. The phenomenally popular, New York Times bestselling satirist whom the Atlanta Journal-Constitution calls, “Stephen King with a whoopee cushion and a double-espresso imagination” has already lampooned Shakespeare, San Francisco vampires, marine biologists, Death…even Jesus Christ and Santa Claus! Now, in his latest masterpiece, Sacre Bleu, the immortal Moore takes on the Great French Masters. A magnificent “Comedy d’Art” from the author of Lamb, Fool, and Bite Me, Moore’s Sacre Bleu is part mystery, part history (sort of), part love story, and wholly hilarious as it follows a young baker-painter as he joins the dapper Henri Toulouse-Lautrec on a quest to unravel the mystery behind the supposed “suicide” of Vincent van Gogh.

About the Author
Christopher Moore is the author of twelve previous novels: Practical Demonkeeping, Coyote Blue, Bloodsucking Fiends, Island of the Sequined Love Nun, The Lust Lizard of Melancholy Cove, Lamb, Fluke, The Stupidest Angel, A Dirty Job, You Suck, Fool, and Bite Me. He lives in San Francisco, California.

SOURCE:  PUBLISHER
MY THOUGHTS
ABSOLUTELY LOVED IT
This is a sneaky little read, it crept up on me and before I knew it, I was in love!  Christopher Moore will take you on a warped tour of the history of the color blue, but like all Moore books, there is weirdness and twists until you get to that moment of epiphany and the whole curious tale becomes brilliant.  The story starts out with innocently enough with a baker / painter Lucien Lessard (don’t bother googling him, he only exists in Moore’s mind), wondering why his good friend and fellow painter Van Gogh shoots himself and then walks a mile to a doctor.  He conspires with Toulouse Lautrec to find out the truth behind his “suicide”.  In his search for the truth, he makes some surprising discoveries behind the majority of painters that have had brilliant, yet strangely unsettling intersections all with the same colorman who supplies them all with blue paint.  Weaving through the history and the great names of the Paris art scene, the mystery behind the color blue unravels into what becomes the story of those mythical creatures known as muses.
The characters in this book are so full of life and detail.  The colorman is one of those quirky characters that can only exist in a Moore book , especially with a name like “poop on a stick”.   With the colorman’s counterpart muse, known by several names, who longs to be free of the colorman, is still enslaved by the magical properties of the color blue.  This is a truly magical use of a metaphor and links the whole story from murder mystery to love story.  There are some wonderful inventive histories about painters explained as well like where did Van Gogh’s ear end up, why so many painters dies of syphillis, and why so many artist abandon their work throughout the years.  It also takes you back in time to the earliest of cave paintings and will answer that other question of why there was never blue to be seen there.  See, now you will be googling cave paintings to see if that is correct.
I know Moore’s books have all been optioned for movies and this is one that I really hope makes it to the screen now with the success of Midnight in Paris.  This is the literary equivalent except that there are famous painters in the place of authors.  Moore is the only author I have first editions that I will keep forever since I first learned of him in San Francisco at the City Lights book store when my husband asked for something weird.  I really didn’t get into him until I read Lamb and then I devoured everything he has ever written. I must admit that the only book of his I didn’t *get* was Fool and now I may have to go back and reread that one.