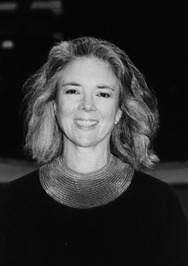 Where a Novel Comes From
By Beth Gutcheon,
Author of Gossip
In my experience, a novel accrues, over time and from many sources, with ideas and aspects seeming to light up until enough of them form a cluster that can become a story. I read a lot of biographies and I love volumes of letters because they give you authentic voices, the diction and vocabulary of a period. A major plot line in my novel Leeway Cottage came from one sentence in a book of letters by Sylvia Townsend Warner. Her fiction doesn’t speak to me at all, but her letters are brilliant and wonderfully frank and full of the daily details of a life. At one point the love of Sylvia’s life left her for a younger woman who was more beautiful and far richer than Sylvia. She bore it quietly, in spite of being devastated, because she wanted her lover’s happiness even more than she wanted her own. Eventually, Valentine came back, and Sylvia wrote to a friend this incredibly simple explanation: her rival had all the advantages, except that “I was better at loving, and being loved.”
What a thing to say, what a thing to understand.
I think Gossip started with a biography of Emily Post. I’m a longtime fan of Mrs. Post, a very witty writer and brave, self-reliant and deeply considerate woman. Etiquette books in general paint a vivid picture of changing manners and mores, but Post’s are the most fun. From her 1928 edition one learns that is shocking to allow your butler or footmen to sport facial hair of any kind. Who knows, in this Downton Abby world, when that might come in handy? (As you can infer, I find a lot of research material in second hand bookstores.) Mrs. Post is brisk and confident, but a crusader against snobbery and fussiness, and I thought I might do a character based on her, but instead turned out to use Tuxedo Park, the very grand, very early gated community where she spent much of her childhood and where she is buried. It was the perfect symbol for one of the questions the book raises: what does it mean to be an insider in society? What does it mean to choose to be an outsider? A maverick, if you will? By society, I mean any group that sets the tone for a community, be it the local grange in a farming village, or Mrs. Astor’s Four Hundred.
This is real life, but it is also Edith Wharton territory, of course; so many of her New York plots are turned by the terrible power of social judgments and gossip. But in Wharton’s world, and in Mrs. Post’s, there is a recognized social standard and body of opinion. Our world is very different. The true purpose of manners, according to Emily — I think of her as Emily, since she feels to me like a friend — is to treat others with consideration and kindness and avoid making people uncomfortable. In my mother’s youth, good manners required addressing people formally unless you were truly familiars. When she insisted, though, on calling my friends “Mrs. Todd” or “Mr. West” although she was 35 years older than we and we were wearing blue jeans with our hair down to here, it didn’t seem polite, it just seemed weird, really a protest or rebuke, if not actually to us, then to the world for changing and shifting the ground beneath her feet.
So the deal with manners is not propriety, but kindness. Which reminded me of the “Iago question,” which you hear a lot about if you’re an English major. What is his motive, why is he evil? Does he even know? He does seem to be one of the few characters in literature or life who actually knows that he’s mean. So I re-read Othello, and Othello led me again to the subject of gossip, or rather to the fact that knowledge is power, and words are weapons. I began to think of a modern character who winds up doing something like what Iago does, but in such a way that we understand what she thinks she’s doing when she does it. You almost never meet with pure malice outside of a mental ward, but you certainly all the time meet with people who do casual harm to others while feeling swell about themselves, and that seemed like a proper subject for a novel.
But is that really where this particular novel came from? I think we all wonder why some things lodge in memory when we forget so much else; someone once told me we remember moments when we learned things. Here’s a moment from when I was about seven. The subject of rumor had come up, maybe in life, maybe in a book. My mother told us about the girl who went to confession because she’d said something untrue about somebody else. The priest said that as a penance, she was to go outside, cut open a feather pillow, and empty it on the breeze. Then she was to retrieve all the feathers. I remember my childhood bedroom, blue wallpaper, my sister’s horseshow ribbons on a string above the mantel, the clock on the wall in the shape of a black and white cat with eyes and tail that went back and forth as it ticked, and that story.
© 2012 Beth Gutcheon, author of Gossip
Author Bio
Beth Gutcheon, author of Gossip, is the critically acclaimed author of eight previous novels: The New Girls, Still Missing, Domestic Pleasures, Saying Grace, Five Fortunes, More Than You Know, Leeway Cottage and Good-bye and Amen. She is the writer of several film scripts, including the Academy Award nominee The Children of Theatre Street. She lives in New York City.
For more information please visit http://www.bethgutcheon.com and follow the author on Facebook 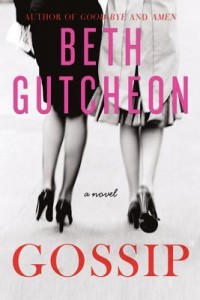 Publication Date: March 20, 2012
The critically acclaimed author of Good-bye and Amen, Leeway Cottage, and More Than You Know returns with a sharply perceptive and emotionally resonant novel about all the ways we talk about one another, the sometimes fine line between showing concern and doing damage, and the difficulty of knowing the true obligations of friendship.

Loviah “Lovie” French owns a small, high-end dress shop on Manhattan’s Upper East Side. Renowned for her taste, charm, and discretion, Lovie is the one to whom certain women turn when they need “just the thing” for key life events: baptisms and balls, weddings and funerals. Among those who depend on Lovie’s sage advice are her two best friends since boarding school days: Dinah Wainwright and Avis Metcalf. Despite the love they share for their mutual friend, there has always been a chilly gulf between Dinah and Avis, the result of a perceived slight from decades ago that has unimaginably tragic echoes many years later.

An astute chronicler of all that makes us human, Beth Gutcheon delivers her most powerful and emotionally devastating novel to date. Gossip is a tale of intimacy and betrayal, trust and fidelity, friendship and motherhood that explores the way we use “information” — be it true, false, or imagined — to sustain, and occasionally destroy, one another.

WANT TO WIN A COPY THIS BOOK?
Contest is open to anyone over 13 years old with a US mailing address and ends 4.18.12
Winner will be chosen by Random.org on 4.19.12.  Only one winner per mailing address.
Winner will have 48 hours to respond to email or a new winner will be chosen
This giveaway is sponsored by William Morrow Books and  for ONE WINNER!
Complete the form below!
Follow Me
+1 Leave a comment with an email address (you can do this daily for extra entries)
+1 Be my friend on GoodReads HERE
+1 Follow me on Twitter HERE
+1 Like BookHounds on Facebook HERE
+1 Post about this giveaway on your social networking site and leave me a link here.  You can do this daily   and receive an entry for each link you leave.  One per day per site.
More Extra Entries for Beth Gutcheon
Get one extra entry for each follow
Facebook
Twitter
Goodreads
Website by RSS