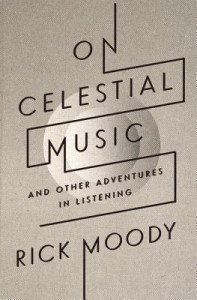 Publication Date: March 21, 2012
Rick Moody has been writing about music as long as he has been writing, and this book provides an ample selection from that output. His anatomy of the word cool reminds us that, in the postwar 40s, it was infused with the feeling of jazz music but is now merely a synonym for neat. “On Celestial Music,” which was included in Best American Essays, 2008, begins with a lament for the loss in recent music of the vulnerability expressed by Otis Redding’s masterpiece, “Try a Little Tenderness;” moves on to Moody’s infatuation with the ecstatic music of the Velvet Underground; and ends with an appreciation of Arvo Part and Purcell, close as they are to nature, “the music of the spheres.”

Contemporary groups covered include Magnetic Fields (their love songs), Wilco (the band’s and Jeff Tweedy’s evolution), Danielson Famile (an evangelical rock band), The Pogues (Shane McGowan’s problems with addiction), The Lounge Lizards (John Lurie’s brilliance), and Meredith Monk, who once recorded a song inspired by Rick Moody’s story “Boys.” Always both incisive and personable, these pieces inspire us to dive as deeply into the music that enhances our lives as Moody has done–and introduces us to wonderful sounds we may not know.

Rick Moody (born Hiram Frederick Moody, III on October 18, 1961, New York City), is an American novelist and short story writer best known for The Ice Storm (1994), a chronicle of the dissolution of two suburban Connecticut families over Thanksgiving weekend in 1973, which brought widespread acclaim, and became a bestseller; it was later made into a feature film.

Contest is open to anyone over 13 years old with a US or Canadian mailing address (sorry, no PO Boxes)

Contest ends on 4.9.12 Winner will be chosen by Random.org on 4.10.12
Winner will have 48 hours to respond to email or a new winner will be chosen.
This giveaway is sponsored by Little Brown and THREE copies are available.
Complete the below form
Follow Me
Extra Entries
+1 Follow me on Twitter HERE
+1 Like BookHounds on Facebook HERE
+1 Like Win a Book on Facebook HERE
+1 Be my friend on Goodreads HERE
+1 for social networking this giveaway and leave me a link (blog, twitter, facebook, etc) once daily
+1 Leave a comment — you can do this daily, just leave me an email  or twitter address!