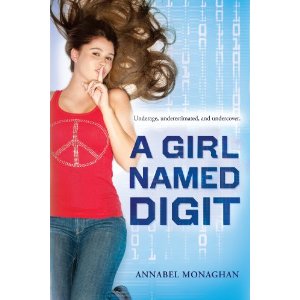 Publication Date: June 5, 2012
Farrah “Digit” Higgins may be going to MIT in the fall, but this L.A. high school genius has left her geek self behind in another school district so she can blend in with the popular crowd at Santa Monica High and actually enjoy her senior year. But when Farrah, the daughter of a UCLA math professor, unknowingly cracks a terrorist group’s number sequence, her laid-back senior year gets a lot more interesting. Soon she is personally investigating the case, on the run from terrorists, and faking her own kidnapping– all while trying to convince a young, hot FBI agent to take her seriously. So much for blending in . . .

Annabel Monaghan lives in Rye, New York, with her family. This is her first novel for teens.