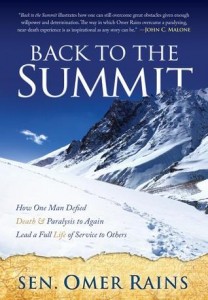 
“You’ll never walk again.” California Senator Omer Rains had been a politician on the global stage, a power-broking lawyer of A-list celebrities, and conqueror of some of the highest mountains in the world. But when a paralyzing brain aneurysm and stroke hit him at age 61, he became more helpless than a small child. In Back to the Summit, Rains takes readers on a courageous journey toward recovery, both physical and spiritual, as he reflects on the people, events, and American history that shaped his life and gave him the strength to dare to walk again. Every flashback to the past offers insight into the philosophy that once saved his life and now defines his every action: “Get up from every fall, no matter how great or far, and continue to live life fully.” Those who have suffered physical trauma may find hope in his story; their loved ones may gain insight and understanding. And any reader who has ever faced a mountain of a setback will be inspired to keep on fighting to live again. Back to the Summit takes us on a journey toward physical and spiritual recovery that reminds us that anything is possible.

Rains has fought tirelessly throughout his adult life for environmental protection, for political reform, and for civil and human rights—both at home and abroad. He has also served as a prominent international lawyer, financier and investment advisor with extensive experience in all major world markets and finance centers.

After a life-threatening stroke and aneurysm at age sixty-one, Rains beat incredible medical odds to walk again and thereafter to once again lead an active life of service to others. He continues to engage in humanitarian and charitable work in all parts of the lesser developed world with special emphasis on projects in Nepal, India, and Bhutan, as well as on more recent projects in Latin America. Among other responsibilities, he currently serves as Chairman of the Board of READ Global. When not abroad, he makes his principal residence at Lake Tahoe (California/Nevada).

Mr. Rains is an experienced and frequent lecturer and mentor on virtually all topics covered in Back to the Summit including, but not limited to: overcoming brain injuries and paralysis; doing international legal and finance work; and speaking on the enormously important and gratifying work being done to promote world literacy by Rural Education and Development (READ) Global. He is also available to speak on the therapeutic effects of Transcendental Meditation (TM) and the calming practice of Tibetan Buddhism. He can be contacted through his websites: www.backtothesummit.com or www.senorains.com.


After a slow start, I really enjoyed the life story of Omer Rains and how a medical issue changed his life.  After suffering a stroke in his sixties, doctors told the lawyer-adventurer that he would never walk nor be able to return to the lifestyle he enjoyed. Never one to be told no, he took on the challenge and recovered through grueling physical therapy and mental reconditioning.  I really think that the fact he was in such great condition before his stroke helped him regain his physical strength, something most people with this issue rarely recover from.  He also didn’t become bitter as his recovery slowed at times.  I did think that this story was a bit self promotional as well as very inspirational in that “you can do it” motivational thread.  If you are looking for an adventure, public life memoir,  you will enjoy this one.