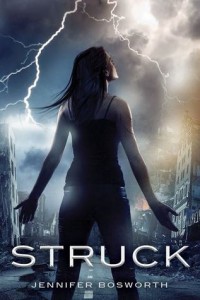 
Mia Price is a lightning addict. She’s survived countless strikes, but her craving to connect to the energy in storms endangers her life and the lives of those around her.


Los Angeles, where lightning rarely strikes, is one of the few places Mia feels safe from her addiction. But when an earthquake devastates the city, her haven is transformed into a minefield of chaos and danger. The beaches become massive tent cities. Downtown is a crumbling wasteland, where a traveling party moves to a different empty building each night, the revelers drawn to the destruction by a force they cannot deny. Two warring cults rise to power, and both see Mia as the key to their opposing doomsday prophecies. They believe she has a connection to the freak electrical storm that caused the quake, and to the far more devastating storm that is yet to come.


Mia wants to trust the enigmatic and alluring Jeremy when he promises to protect her, but she fears he isn’t who he claims to be. In the end, the passion and power that brought them together could be their downfall. When the final disaster strikes, Mia must risk unleashing the full horror of her strength to save the people she loves, or lose everything.

Jennifer Bosworth lives in Los Angeles, California, where lightning hardly ever strikes, but when it does she takes cover. She is the writer half of a writer/director team with her husband, Ryan Bosworth. Learn more about her at http://www.jenniferbosworth.com.

ABSOLUTELY LOVED IT
If you grew up in LA like I did, you fear earthquakes, well, not so much fear them as accept them as a fact of life.  You know one is going to hit sometime, you just don’t know when.  Lightening strikes are much less of a concern since near the beach, the storms are at a minimum.  Mia and her family are forced to move from Lake Havasu to Venice Beach when she creates a stir by harming a man during a lightening strike. Her biggest issue is that she craves the strikes like a drug addict and has been struck so many times that her skin is marred to the point she is covered at all times, ashamed to let anyone see.  So when the big one hits Los Angeles and unleashes lightening that creates unbelievable energy to the point where no one is sure which happened first, the lightening or the earthquake.


Venice has become the catch all for the population with no place else to go.  All of the extreme elements of life come to dwell there.  The drug dealers, those who believe they can save the world and most of all the Displaced in much of a zombie like state.  At the center of the wasteland known as Tent City is the Prophet who correctly predicted the earthquake.  The Prophet has surrounded himself with others, known as Apostles, who have been “struck” and now have special gifts.  In sly references to the televangelist movement, Bosworth has created a villain that barely escapes cartoon proportions, but in a good way.  There were parts of the plots that really surprised me, but bits were predictable only because I am good at guessing.


Mia is just everything I love in a heroine.  She follows her own heart, gets confused with what her brain tells her and decides her own future in spite of her self.  I really thought the author poked fun at some of the strangeness that is LA.  Rave type (Rovers) parties exist in the parts of Downtown that took the worst of the quake so that everyone can still dance in the face of death.  I was really surprised that Hollywood wasn’t devastated more since it is widely regarded as the bastion of evil, but I guess that the Puente HIlls fault was used for accuracy.


There are so many delicious characters that offer counterpoints to Mia.  Rachel, the evil goth girl turned evil good girl, has it out for Mia and wants to convert her to the Prophet’s side so she can be saved (NOT!).  Katrina, a Seeker, doesn’t believe the world should end as the bible says and tries to get Mia over to their side which you aren’t quite sure is the good side either.  Jeremey, the boy she falls for, is not who she thinks he is and not what he thinks he is either.  Overall, everything weaves together perfectly and the only bad thing I can say is that I am not quite sure that there is a follow up for this book.  I would love to see one, but it ends with little opening for a sequel.  Of course, there are the usual references to drugs, alcohol but not much sex, just some kissing, so this one is best left for mature teens.  I think that adults will love the bits of humor and sarcasm that might be above some kids.