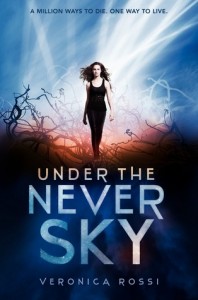 Since she’d been on the outside, she’d survived an Aether storm, she’d had a knife held to her throat, and she’d seen men murdered. This was worse. Exiled from her home, the enclosed city of Reverie, Aria knows her chances of surviving in the outer wasteland—known as The Death Shop—are slim. If the cannibals don’t get her, the violent, electrified energy storms will. She’s been taught that the very air she breathes can kill her. Then Aria meets an Outsider named Perry. He’s wild—a savage—and her only hope of staying alive. A hunter for his tribe in a merciless landscape, Perry views Aria as sheltered and fragile—everything he would expect from a Dweller. But he needs Aria’s help too; she alone holds the key to his redemption. Opposites in nearly every way, Aria and Perry must accept each other to survive. Their unlikely alliance forges a bond that will determine the fate of all who live under the never sky. In her enthralling debut, Veronica Rossi sends readers on an unforgettable adventure set in a world brimming with harshness and beauty. This enhanced edition contains the full text of the novel, plus this exclusive content:–A Q&A with Veronica Rossi–Veronica’s Favorite Things–A Playlist Inspired by Under the Never Sky–Behind-the-Scenes Development of the “Smarteye”–A Video Look Inside Veronica Rossi’s Writing Process–A Sneak Peek at Book Two: Through the Ever Night

Veronica Rossi graduated from UCLA and studied fine art at California College of the Arts in San Francisco. She began writing fiction for teens and received first-place awards in the Pacific Northwest Writers Association and SouthWest Writers annual contests before completing Under the Never Sky. It’s since captivated publishers in more than twenty countries worldwide and been optioned for film by Warner Bros. Veronica lives in northern California with her husband and two sons.