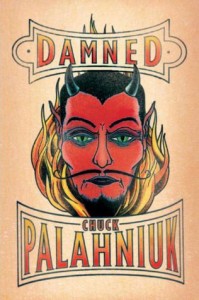 Publication Date: October 18, 2011
Think adolescence is hell? You have no idea… Welcome to Dante’s Inferno, by way of The Breakfast Club, from the mind of American fiction’s most brilliant troublemaker.

“Death, like life, is what you make out of it.” So says Madison, the whip-tongued 11-year-old narrator of Damned, Chuck Palahniuk’s subversive homage to the young adult genre. Madison is abandoned at her Swiss boarding school over Christmas while her parents are off touting their new film projects and adopting more orphans. Over the holidays she dies of a marijuana overdose–and the next thing she knows, she’s in Hell.

This is the afterlife as only Chuck Palahniuk could imagine it: a twisted inferno inspired by both the most extreme and mundane of human evils, where The English Patient plays on repeat and roaming demons devour sinners limb by limb. However, underneath Madison’s sad teenager affect there is still a child struggling to accept not only the events of her dysfunctional life, but also the truth about her death.

For Madison, though, a more immediate source of comfort lies in the motley crew of young sinners she meets during her first days in Hell. With the help of Archer, Babette, Leonard, and Patterson, she learns to navigate Hell–and discovers that she’d rather be mortal and deluded and stupid with those she loves than perfect and alone.

CHUCK PALAHNIUK’s eleven novels are the bestselling Tell-All, Pygmy, Snuff, Rant, Haunted, Lullaby, and Fight Club, which was made into a movie by David Fincher, Diary, Survivor, Invisible Monsters, and Choke (also made into a film). He is also the author of the nonfiction profile of Portland, Fugitives and Refugees, published as part of the Crown Journey Series, and the nonfiction collection Stranger Than Fiction. He lives in the Pacific Northwest.

So, if Christopher Moore (think Abby Normal from Bite Me)  and Judy Blume got together and wrote a book dedicated to a life lived in hell as a sort of CandyLand game with all of the twists and turns that move a player forward; where candy is currency .  Each chapter starts with a note from Madison, the eleven year old protagonist address to Satan.  As she accepts her death and now after life, she finds that even small infractions are enough to send you to the underworld. Honk your car horn?  You get 700, once you surpass that magic number, kiss heaven good bye.   Same thing for being rude, an idiot and not picking up your trash.  As far as Madison can figure out, she ended up in hell because she smoke pot.  There is more to the story than that, but you have to read this one to the bitter end to find out exactly how she died.

The writing is so superb that I can’t even describe the pleasure of each word and the placement.  Most writers have one or two quotable lines, but this whole book is entirely quotable.  I have read most of the author’s work and this totally redeemed him in my eyes for Pygmy.  I had a hard time reading that one.  In no way is this book suitable for younger teens but more adventurous ones should really enjoy this.  It takes young adult paranormal drama to the next level.   Hell is also the location of telemarketers.  Madison rules hell as she convinces people to give up their eternity for hell and become the top recruiter on her way to world domination.  She does get her chance for salvation, but instead decides she is more suited to a life as a ruler. 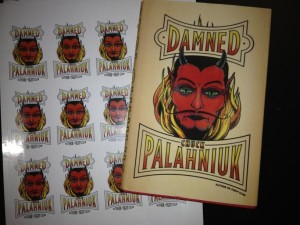 I have two sheets of Stickers for two lucky people — just complete the form below and I will pick the winners on 2.29.12