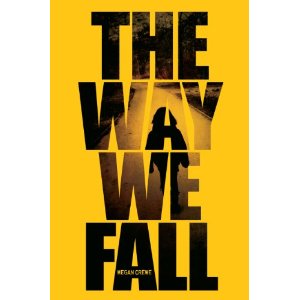 It starts with an itch you just can’t shake. Then comes a fever and a tickle in your throat. A few days later, you’ll be blabbing your secrets and chatting with strangers like they’re old friends. Three more, and the paranoid hallucinations kick in.
And then you’re dead.
When a deadly virus begins to sweep through sixteen-year-old Kaelyn’s community, the government quarantines her island—no one can leave, and no one can come back.
Those still healthy must fight for dwindling supplies, or lose all chance of survival. As everything familiar comes crashing down, Kaelyn joins forces with a former rival and discovers a new love in the midst of heartbreak. When the virus starts to rob her of friends and family, she clings to the belief that there must be a way to save the people she holds dearest.
Because how will she go on if there isn’t?

Megan Crewe crafts a powerful and gripping exploration of self-preservation, first love, and hope. Poignant and dizzying, this heart-wrenching story of one girl’s bravery and unbeatable spirit will leave readers fervently awaiting the next book in this standout new series.

Like many authors, Megan Crewe finds writing about herself much more difficult than making things up. A few definite facts: she lives in Toronto, Canada with her husband and two cats (and does on occasion say “eh”), she tutors children and teens with special needs, and she has yet to make friends with a ghost, though she welcomes the opportunity. Her first novel, GIVE UP THE GHOST, was published by Henry Holt in 2009 and is now out in paperback. Her second novel, THE WAY WE FALL, is coming in January 2012 from Disney-Hyperion.

Kaelyn’s family has moved from Toronto to an island that is a vacation spot where her father has a new job doing microbiological research.  She makes new friends, finds her first love, (Leo),  and in a series of diary entries and notes written to Leo who has moved off the island.  There, a virus is taking over the island and when it turns deadly, the government closes off the area to everyone. No one can leave and they are forced to deal with shortages, illness and loss of communication to the outside world.  It starts out with cold like symptoms, quickly proceeds to a high fever with delusions and then death.  So with the world crashing down around her, Kaelyn must quickly adapt to survive.

This whole plot would make an amazing Twilight Zone episode.  They way it is written conveys clear imagery of a perfect world gone mad with characters that are all too real.  Kaelyn is one of a handful that survives the virus and in the process loses her mother and later her father.  In a sense it becomes almost like Lord of the Flies, where teens are taking on grown up roles, with some being good and others becoming self serving and cruel. Kaelyn also forms a tenuous relationship with Tessa, her rival for Leo’s affections.  Tessa is a perfect counter point to Kaelyn with her love of plants and both seem to be on the same level intellectually.

I adored the way it was written in a diary form since it seemed much more personal with a journalistic approach to the story telling. Kaelyn is forced to face all of her worst fears along with the rest of the town.  Of course, the guys split into two factions – good versus evil — where one group helps out and the other devolves into thugs.  Her brother is another interesting point which I would have liked to explore more, but his appearances are brief.  There are some seriously sad parts to this book, but it also uplifting at the same time.  This is one of those books that you must read in one sitting since you will be dying (cough) to find out what happens next.