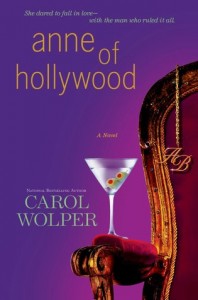 “I wasn’t prepared for the enemies. Had I been as gorgeous as a supermodel, or as rich as an heiress, or an actress with an Oscar to my credit, people would still not be happy that I had Henry’s attention, but they’d understand. What they resented was the king coupling with a ‘nobody.’”Skirts may be shorter now, and messages sent by iPhone, but passion, intrigue, and a lust for power don’t change. National bestselling author Carol Wolper spins a mesmerizing tale of a twenty-first-century Anne Boleyn.
Wily, intelligent, and seductive, with a dark beauty that stands out among the curvy California beach blondes, Anne attracts the attention of Henry Tudor, the handsome corporate mogul who reigns in Hollywood. Every starlet, socialite, and shark wants a piece of Henry, but he only wants Anne. The question is: can she keep him?
Welcome to a privileged world where hidden motives abound, everyone has something to sell, and safe havens don’t exist. With her older sister Mary, a pathetic example of a royal has-been, Anne schemes to win her beloved Henry in the only way that gives a promise of forever—marriage. Success will mean contending with backstabbing “friends,” Henry’s furious ex-wife, and the machinations of her own ambitious family, and staying married to a man who has more options than most and less guilt than is good for either of them will take all her skill. Anne will do anything to hold on to the man—and the lifestyle—she adores, however, even if sticking your neck out in Hollywood means risking far worse than a broken heart. With Henry’s closest confidante scheming against her, and another beautiful contender waiting in the wings, Anne is fighting for her life. Can she muster the charm and wit to pull off her very own Hollywood ending?

Carol Wolper got her start in Hollywood working for producers Don Simpson and Jerry Bruckheimer. In 1999, her debut novel, The Cigarette Girl became a national bestseller that was translated into seven languages. Over the last six years Carol has written three pilot scripts for ABC, as well as scripts for CBS, FX, HBO, and Warner Brother Studio. She has written for Vogue, Los Angeles Magazine (where she had her own column), “C” magazine, L.A. Confidential, Art Basel Magazine, and the L.A. Times Sunday magazine where she is currently a contributing writer.

I mean really LOVE LOVE LOVED this one! This is brilliant!

So, you probably already know the story of Anne Boleyn and the Tudors, but you have never read anything as interesting and fun as this new interpretation.  Henry is re imagined as a billionaire power broker that rules Hollywood as his kingdom.  Anne is the daughter of a social climbing entertainment lawyer with two siblings that are great successes.  Mary had a fling with Henry years ago while she was a young model while her brother George may or may not be a bisexual amd struggling actor.  The whole story fits in nicely with the backstabbing and social climbing that occurs daily in Hollywood with the details much like a Shakespearean play.  Anne is witty, fun and a bit scheming although not really overt about it.  She is also a bit naive about money and the power plays that go on behind the scenes or at least that is the way she is portrayed in the book and history.

All I can say is this book is FUN and I really didn’t want it to end.  I can now imagine more retelling of famous historical figures and their lives much like the Austen fiction that has become so popular these days.  There is all of the soap opera goings on in this retelling but what I really enjoyed was Wolper’s attention to detail and how she redid some of the characters.  Cardinal Wolsey is an investment manager in a Madoff kind of way with the name play of Carl Wolsey — which sounds very similar.  Theresa Cromwell, plays the trusted advisor to Henry who schemes to get Anne out of the picture while his ex wife, Catherine is portrayed as a basket case with insomnia and a new found religious bent.  So at least, in this story, Anne is just banished, not beheaded and in true chick lit fashion, she ends up back on her feet!  I guess women have come a long way since the days of the real Tudor court.