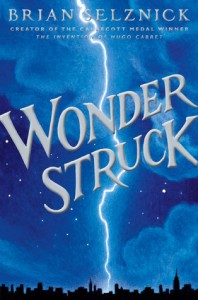 Publication Date: September 13, 2011 | Age Level: 9 and up | Grade Level: 4 and up
From Brian Selznick, the creator of the Caldecott Medal winner THE INVENTION OF HUGO CABRET, comes another breathtaking tour de force.

Playing with the form he created in his trailblazing debut novel, The Invention of Hugo Cabret, Brian Selznick once again sails into uncharted territory and takes readers on an awe-inspiring journey.

Ben and Rose secretly wish their lives were different. Ben longs for the father he has never known. Rose dreams of a mysterious actress whose life she chronicles in a scrapbook. When Ben discovers a puzzling clue in his mother’s room and Rose reads an enticing headline in the newspaper, both children set out alone on desperate quests to find what they are missing.

Set fifty years apart, these two independent stories–Ben’s told in words, Rose’s in pictures–weave back and forth with mesmerizing symmetry. How they unfold and ultimately intertwine will surprise you, challenge you, and leave you breathless with wonder. Rich, complex, affecting, and beautiful–with over 460 pages of original artwork–Wonderstruck is a stunning achievement from a uniquely gifted artist and visionary.

In addition to The Invention of Hugo Cabret, Brian Selznick is the illustrator of the Caldecott Honor winner, The Dinosaurs of Waterhouse Hawkins, and the New York Times Best Illustrated Walt Whitman: Words for America, both by Barbara Kerley, as well as the Sibert Honor Winner When Marian Sang, by Pam Muñoz Ryan, and numerous other celebrated picture books and novels. Brian has also worked as a set designer and a puppeteer. When he isn’t traveling to research and talk about his work all over the world, he lives in San Diego, California, and Brooklyn, New York.

MY THOUGHTS
ABSOLUTELY LOVED IT
What an amazing story!  This one is full of imagination and insight brought together by words and pictures intertwined to tell two stories that become one.  What is so fascinating about this book is that  the stories of Rose, told through images and in the early part of the 1900’s and Ben, told through words with a few illustrations combine in the end to make an enduring and gratifying tale.  Rose, somewhat of an orphan herself and living in a mansion across the river from New York City, finds refuge in movies before they became they become filled with sound which is a problem for her since she is deaf.  Ben, is now an orphan and survives a lightening strike to find his hearing gone.  Since his mother died, he is determined to find his father, whom he knows little about.
Even thought their stories take place 50 years apart, there are parallels between the two.  They both end up in the Natural History Museum where they discover a life and purpose both unknown to them before.  Ben doesn’t know the full story of his father until he starts digging and finds an old address and a bookmark in his mother’s belongings.  He sets out with some cash for the address in New York City and through a bit of luck finds that his father worked at the museum.  Rose has her own search for her mother, an actress, and ends up with her brother who works at the museum where she finds work.  They both meet there and learn about an amazing connection both familial and historic.
WOW!  This is one that will stay with me a long time.  It is such wonderful work that went into this creation.  I can easily imagine that this is a book that can be shared through generations and has important lessons about aging, growing up and the connections between them.  It truly touched a place in my heart with the details that brought everything to life. I felt so sad for Ben as he struggled with his hearing loss and not having a mother, you wonder how he gained the strength to go on his quest.  Rose also tugged at my heartstrings when she is shut out by her mother and the loss she feels when movies added sound and took away her one true joy.  The ending is just spectacular that these two find themselves related and connected.  I highly recommend this one to all ages!