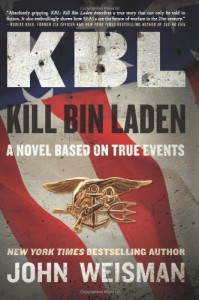 Publication Date: November 15, 2011
The acclaimed #1 New York Times bestselling military thriller writer and coauthor of the bestselling Rogue Warrior series goes beyond the headlines and worldwide speculation in this pulse-pounding fictional account of the breathtaking hunt for the world’s most wanted terrorist, Usama Bin Laden
KBL
Some truths are better told in fiction. In this riveting novel drawn from actual events and based on real-life heroes whose identities remain classified—including soldiers, sailors, intelligence operatives, technocrats, analysts, and policymakers—John Weisman fills in the blanks of what may have happened during the hunt and capture of Usama Bin Laden.
Moving from the political battlefields of Washington, D.C., and the secure, seventh-floor suite of the CIA director in Langley, Virginia, to the dusty streets of Peshawar, Lahore, and Abbottabad, Pakistan, to the rough Afghan interior, to the Middle East and western Europe, this fictional narrative brings to life the drama behind SEAL Team 6’s breathtaking raid in which Bin Laden—a.k.a. Crankshaft, a.k.a. al Mas (the Diamond), the ghost, the wraith, the grail for counterterrorists for more than a decade—met his fate.
In the Oval Office, the Pentagon, the CIA, and the State Department, Washington’s power brokers, the president, the director of the Central Intelligence Agency, and the Secretary of Defense conduct secret meetings, battle for political supremacy, and make life-and-death choices. Meanwhile, at an anonymous naval installation just south of Virginia Beach, Virginia, the Naval Special Warfare Development Group trains in secret for the mission of a lifetime. And at Vallhalla Base, the CIA’s safe house in Abbottabad, dedicated intelligence officers gather intel critical to locating and capturing the elusive Bin Laden.

John Weisman, acclaimed #1 New York Times bestselling military thriller writer and coauthor of the bestselling Rogue Warrior series, is one of a select company of authors to ever have their books appear on both lists. He reviews books on intelligence and military affairs for the Washington Times and his analysis has appeared in AFIO’s periodical Intelligencer. Weisman lives in the Blue Ridge Mountains of Virginia.

MY THOUGHTS
REALLY LIKED IT
The story recreates what happened when SEAL Team Six that night of the Bin Laden raid with fictionalized members and recounts what we know about the events filled in with a bit of speculation.  Reading recent news reports about that night when Obama made the fateful decision goes somewhat against what is written in the book and I am sure that more details will be released in the upcoming months.  I really have to say whether the story told here is true or not, this is one fast ride!
The characters are well defined and interesting making you care about them as individuals and not some crazy guys bent on murder and revenge.  They training and their resources is just amazing to read about.  The back story in how they figured out where Bin Laden was is probably the most fascinating thing in the story.  This really had a Mission Impossible theme going on since what the SEALS accomplished.  Don’t try and read this one before going to sleep sleep since it might keep you up wondering what happens next.