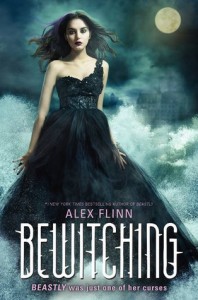 “It is the story of Kendra and her first 300 or so years of life. In Bewitching, Kendra ponders whether to help out a modern day plain-looking stepsister, while also reflecting on her experiences in the 1666 British plague, the court of Louis XV, and on the Titanic.” (Source: author’s Facebook intro  & website)

Once, I put a curse on a beastly and arrogant high school boy. That one turned out all right. Others didn’t.

I go to a new school now—one where no one knows that I should have graduated long ago. I’m not still here because I’m stupid; I just don’t age.

You see, I’m immortal. And I pretty much know everything after hundreds of years —except for when to take my powers and butt out.

I want to help, but things just go awry in ways I could never predict. Like when I tried to free some children from a gingerbread house and ended up being hanged. After I came back from the dead (Immortal, remember?!), I tried to play matchmaker for a French prince and ended up banished from France forever. And that little mermaid I found in the Titanic lifeboat? I don’t even want to think about it.

Now, a girl named Emma needs me. I probably shouldn’t get involved, but her gorgeous stepsister is conniving to the core. I think I have just the thing to fix that girl and it isn’t an enchanted pumpkin. Although you never know what will happen when I start ….

Alex Flinn loves fairy tales and is the author of the #1 New York Times bestselling Beastly, a spin on Beauty and the Beast that was named a VOYA Editor’s Choice and an ALA Quick Pick for Reluctant Young Adult Readers. Beastly is now a major motion picture starring Vanessa Hudgens! She also wrote A Kiss in Time, a modern retelling of Sleeping Beauty, and Cloaked, a humorous fairy tale mash-up, as well as Breathing Underwater, Breaking Point, Nothing to Lose, Fade to Black, and Diva. Alex lives in Miami with her family.