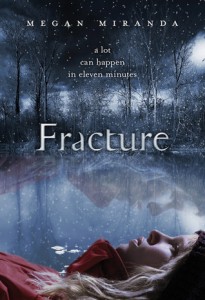 Eleven minutes passed before Delaney Maxwell was pulled from the icy waters of a Maine lake by her best friend Decker Phillips. By then her heart had stopped beating. Her brain had stopped working. She was dead. And yet she somehow defied medical precedent to come back seemingly fine
-despite the scans that showed significant brain damage. Everyone wants Delaney to be all right, but she knows she’s far from normal. Pulled by strange sensations she can’t control or explain, Delaney finds herself drawn to the dying. Is her altered brain now predicting death, or causing it?

Then Delaney meets Troy Varga, who recently emerged from a coma with similar abilities. At first she’s reassured to find someone who understands the strangeness of her new existence, but Delaney soon discovers that Troy’s motives aren’t quite what she thought. Is their gift a miracle, a freak of nature-or something much more frightening?

Megan is a scientist – turned – teacher – turned – stay-at-home-mom – turned – writer. She is not nearly as indecisive as she sounds. She lives near Charlotte, North Carolina, where she volunteers as an MIT Educational Counselor, does the mom thing by day, and writes by night.

Her first novel, FRACTURE, will be published by Walker/Bloomsbury in early 2012.

Delaney has a near death experience when she and her best friend Decker are out on thin ice and she falls under.  In all reality, she should be dead, but except for some brain damage that is only apparent on MRIs, she is fine.  Now, she can sense when others around her are going to die.   Decker, in a weird way, has survivor’s guilt and even though her rescued Delaney, he knows she should be dead after 11 minutes under the ice.  When a college student, Troy, approaches her in the library claiming to have read about her in the paper, Decker knows something is not right with him since there was never anything written about her accident anywhere.

Troy is a strange character and as Delaney starts to find out about him and his background, she discovers that he, too, has survived a coma and really should be dead as well.  I truly got the creeps from Troy. He would show up in Delaney’s life just when she was having a crisis and it seems that there is something sinister linking the two of them together.   I was furiously reading this one just to find out what was going on between them.  I also kept waiting for something truly paranormal to happen and explain why Delaney always seemed to show up just at the time of someone’s death.  The big twist is something you have to figure out on your own by reading this one.  You won’t regret those few hours it takes.

I really enjoyed the breakneck pacing in this psychological thriller, it was a quick and easy read.  The characters were all well thought out and believable.  I really wish there was more to go on about Delaney’s life before her accident.  We just know little things like she was a geek, somewhat of a social outcast and possible valedictorian.  The only thing I can pin on Troy is that he was a psychopath and has some strange pull over Delaney, maybe just the fact they shared a similar near death experience.  You also are kept wondering if the sparks of romance between Decker and Delaney will survive to see another day.  Overall, those who enjoy creepy, possibly paranormal mysteries will love this one.