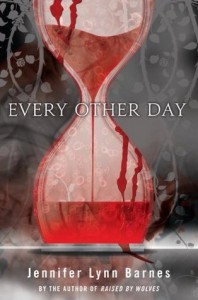 Every other day, Kali D’Angelo is a normal sixteen-year-old girl. She goes to public high school. She attends pep rallies. She’s human.

And then every day in between . . . She’s something else entirely.

Though she still looks like herself, every twenty-four hours predatory instincts take over and Kali becomes a feared demon-hunter with the undeniable urge to hunt, trap, and kill zombies, hellhounds, and other supernatural creatures. Kali has no idea why
she is the way she is, but she gives in to instinct anyway. Even though the government considers it environmental terrorism.

When Kali notices a mark on the lower back of a popular girl at school, she knows instantly that the girl is marked for death by
one of these creatures. Kali has twenty-four hours to save her and, unfortunately, she’ll have to do it as a human. With the help
of a few new friends,

Jennifer Lynn Barnes was born in Tulsa, Oklahoma. She has been a competitive cheerleader, a volleyball player, a dancer, a debutante, a primate-cognition researcher, a teen model, a comic-book geek, and a lemur aficionado. She wrote her first novel, Golden, when she was nineteen.

In 2006, Jen graduated from Yale with a degree in cognitive science and spent a year doing autism research at the University of Cambridge. She is currently pursuing further graduate studies at Yale. Visit her online at www.jenniferlynnbarnes.com.

Most teen girls can change in a second, one minute normal, the next super not normal. For Kali, this couldn’t be more true. Every 24 hours she changes from a normal human teen into a demon killing machine. She has lived entirely alone with no real contact except with her father and now she is thrown into the truly scary world of human teens. Her father insists she attends *regular* high school since his boss’s daughter is going to attend one as well. Bethany is pretty much cheerleader perfect while Kali is socially awkward and would rather kill than chat. So when Kali saves her life, the two are connected in really strange ways. So in a world where Darwin has not only discovered evolution, but also those non human, paranormal creatures. Those creature are roaming the earth but most humans can’t really see them.

This story was full of quirky characters, lots of action and very sharp and witty dialogue. I wanted nothing more than to read about Kali and Beth arguing while solving the mysteries that surround Kali and her true origins. Kali notes that Beth has a *infection* of the Chupacabra kind and tries to take the parasite away from Beth in order to save her life. She thinks when she turns non human, her lethal blood while put an end to it and she will never have to speak to Beth again. Yeah, it doesn’t work out that way.

I really found it interesting in how Kali has minimal contact with other humans yet, she ends up knowing that she is in the *loser* group when it comes to school. There are also remembrances of her mother that are touching. She has enough human in her to know things are just not right and that make her search for the truth. There are a lot of paranormal young adult books that use this outsider curse to move a plot forward, but this really worked for me. This is the first book by this author. although I did try Golden when it first came out, but didn’t click with me. I may have to go try it again now.