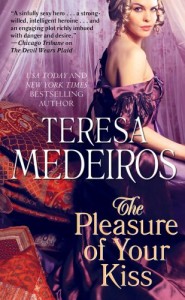 Some pleasures are worth any price…

Legendary adventurer Ashton Burke has roamed the globe for ten years trying to forget the spirited woman he left behind in England. His devil-may-care pursuits are interrupted, though, when he reluctantly agrees to retrieve his brother’s kidnapped fiancée from a sultan’s harem. Too late, he discovers his quarry is none other than Clarinda Cardew, the very same girl who made off with his jaded heart.

The last thing Clarinda wants is to be trapped in a palace of sensual delights with the man whose irresistible kisses still haunt her sleepless nights. She quickly realizes that allowing Ashton to rescue her may put her yearning heart in even greater peril. In a journey both tantalizing and treacherous, Ashton and Clarinda resume the impetuous steps of their dangerous dance only to discover the most seductive pleasure of all may be love itself.

New York Times bestseller Teresa Medeiros wrote her first novel at the age of twenty-one, introducing readers to one of the most beloved and versatile voices in romantic fiction. She has appeared on every national bestseller list, including the New York Times, USA Today and Publishers Weekly lists. She currently has over seven million books in print and is published in over seventeen languages. She was chosen one of the “Top Ten Favorite Romance Authors” by Affaire de Coeur magazine and won the Romantic Times Reviewer’s Choice Award for “Best Historical Love and Laughter”. She is a seven-time Rita finalist, two-time PRISM winner, and two-time recipient of the Waldenbooks Award for bestselling fiction. Her May 2002 release, A KISS TO REMEMBER, was chosen as one of the “Top 10 Romances of the Year” by Booklist magazine, the official publication of the American Library Association, while ONE NIGHT OF SCANDAL, her August 2003 release, won the Romantic Times Reviewer’s Choice Award for Best Historical Romance of 2003.
Teresa is a charter member of the Romance Writers of America Honor Roll, Kentucky Romance Writers, and Novelists, Inc. She lives in Kentucky with her husband and her cats Willow and Buffy the Mouse Slayer.

Clarinda fell in love with the rogue next door and  Ashton broke her heart when he promised to return to her once he had made his fortune.  He never returned but his exploits found their way back to her ears.  When his reckless way almost kill him,  he must reach out to his estranged brother, Max who has comforted Clarinda previously and they become engaged even though she has never forgot about Ashton.  Clarinda is on her way to Max when the ship is attacked and she captured, then sent on to a harem!  Ashton is recruited to help rescue her by Max and he doesn’t realize that this is that same girl he loved.  Yes, you can imagine the the not so cute meet that takes place.

I adore Teresa Medieros’ writing style and I am thrilled that she has written such a fun historical romance.  You may know her from her paranormal romances, but her latest combines all of her strengths.  Clarinda is a feisty heroine while Ashton is the perfect foil and she can give as good as she gets.  Oh, the double entendre there!  The best part of the story is that while improbable, in this world it all could happen and the author makes it so incredibly believable.  Ash, ever the adventurer puts Clarinda through many trial rather than just hand her over to his brother. At times, I almost felt sorry for him since he is just so lost when it comes to where his heart should be.  Thank you, Ms. Medieros, for taking me away for a few wonderful hours.