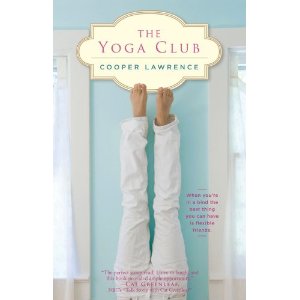 Publication Date: December 20, 2011
Chatting it up with bendy WASPs is the last thing on Coco Guthrie’s mind during her 8:30 a.m. yoga class. Having made her fortune as the world-renowned inventor of Butt-B-Gone derriere cream, Coco still doesn’t feel like she belongs among the upper class— until she attends the swankiest Halloween soiree in Greenwich, Connecticut, where three of her fellow morning yogis shared her brilliant idea to appear as Sarah Palin. Soon it’s clear that a love of stretching isn’t all this accidental sorority—which includes a single mom with echolalia, an entertainment reporter who charms the pants off handsome stars, and a drama-prone producer with a taste for drag— have in common. When the four mischievous Sarahs wander away from the party to sneak a peek at the mayor’s neighboring estate, they are stunned to find him adorned in leather and latex, and rolling up a woman’s body in a Persian rug. To make matters worse, someone has spotted the spying Palins. Someone who threatens to expose their torrid affairs in business and the bedroom. Now the unlikely foursome must use all their wits and wiles to get to the bottom of the kinky crime. But will their budding friendship be strong enough to protect their deepest secrets?

Cooper Lawrence is an accomplished radio veteran who has been in radio for almost twenty years. Currently she can be heard as part of The Big Show with Scott & Todd on WPLJ in New York. Life has changed a bit for the morning team at WPLJ (95.5 FM) now that they are a part of the daily national Fox TV show “Dish Nation” airing 6PM on MY9 in New York Monday through Friday.
Cooper has been a part of Elvis Duran’s Z Morning Zoo at Z100. She has also been on-air at Q104, WKTU, WBAB, WLIR and on WOR where she produced The Joan Rivers Show for the WOR Radio Network. Before joining WPLJ Cooper had been hosting her own nationally syndicated radio show aptly named The Cooper Lawrence Show reaching 2.8 million listeners.
On TV she was the co-host of the VH1 ‘Celebreality’ show Confessions of a Teen Idol and spent two years as the relationship expert on The Tyra Banks Show. She has also been a guest on CNN Headline News’s Showbiz Tonight, Issues with Jane Velez Mitchell, HLN’s Prime News, CBS’ The Early Show, The Today Show, CNN, The O’Reilly Factor, Your World with Neil Cavuto, Hannity, Fox & Friends, The Insider, Entertainment Tonight, CBS Evening News with Katie Couric, ABC’s 20/20, Good Day New York, Dr. Drew, plus several VH1 and E! Entertainment specials.
She has written many articles for a wide variety of publications and has been featured in print for the New York Post, New York Daily News, The New York Times, Chicago Tribune, IN STYLE, SELF, Parenting, Perez Hilton, Popwrap, Cosmopolitan, Family Circle, OK! Magazine, US Weekly, Life & Style, Star Magazine, In Touch Weekly, Popeater, Fox411, The Huffington Post and the now defunct but dear to her heart CosmoGIRL! where she was also on the advisory board.
Her fifth and current book is The Cult of Celebrity: What our Fascination with the Stars Reveals About Us. Previous books include, The Cult of Perfection: Making Peace with Your Inner Overachiever; The Fixer Upper Man: Turn Mr. Maybe Into Mr. Right; Been There, Done That, Kept the Jewelry; and CosmoGIRL’s All About Guys. Cooper’s sixth book is a novel to be published by Simon & Shuster, due out in January 2012 titled The Yoga Club.
Cooper has a master’s degree in developmental psychology and is working hard to finish her PhD.
She and her 96lb puppy, Marconi, work with Angel On A Leash http://www.angelonaleash.org/ and Delta Society


Coco made her money through a cellulite cream, Bailey is a celebrity reporter and sees quite a bit of action, Olivia is a shy geek and CJ is not quite out of the closet.  The group meet at Yoga and become fast friends all deciding to go as Sarah Palin for the Halloween soiree in their Connecticut town.  So when they get to the mayor’s house and find him in kinky attire and rolling up a body in a carpet, I guess you could say things get strange.  Now the group is being threatened by someone that will expose all of their dirty secrets unless they remain quiet about the crime.


This adorable Chick Lit Cozy, is a quick and chatty read, perfect for a dose of lighthearted mystery.  I adored CJ with his witty remarks and almost felt sorry for Olivia and her issues, but she is the quiet strength in this group.  Bailey almost stole the show with her quips though.  I really enjoyed this quick read and if you enjoy Josie Brown or Debra Galant, you will love this author as well.

Contest is open to anyone over 13 years old with a US mailing address (no PO Boxes)
Contest ends on 1.18.12 Winner will be chosen by Random.org on 1.19.12
Winner will have 48 hours to respond to email or a new winner will be chosen.
This giveaway is sponsored by the publisher and me for  ONE winner