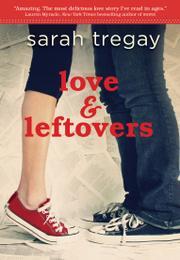 Publication Date: December 27, 2011
My wish is to fall cranium over Converse in dizzy daydream-worthy love.
(If only it were that easy)
Marcie has been dragged away from home for the summer—from Idaho to a family summerhouse in New Hampshire. She’s left behind her friends, a group of freaks and geeks called the Leftovers, including her emo-rocker boyfriend, and her father.
By the time Labor Day rolls around, Marcie suspects this “summer vacation” has become permanent. She has to start at a new school, and there she leaves behind her Leftover status when a cute boy brings her breakfast and a new romance heats up. But understanding love, especially when you’ve watched your parents’ affections end, is elusive. What does it feel like, really? Can you even know it until you’ve lost it?
Love & Leftovers is a beautifully written story of one girl’s journey navigating family, friends, and love, and a compelling and sexy read that teens will gobble up whole.

Sarah Tregay is a graphic designer. When she isn’t jotting down poems at stoplights, Sarah can be found hanging out with her “little sister” from Big Brothers Big Sisters. She lives in Eagle, Idaho, with her husband, two Boston terriers, and an Appaloosa named Mr. Pots.

I am so in awe of authors who can write in free verse and so far, I have been very lucky with my choices in this genre.  This is truly a heart warming story that is a bittersweet and will have so so emotionally involved by the end of the first chapter your head will spin.  Marcie’s parents have been breaking up and the final straw is her father announcing he is gay, while her mother proceeds to fall apart.  She is dragged off to a family vacation home in New Hampshire for the summer while her mother tries to collect herself.  With no friends and the school year fast approaching, Marcie finds herself in the middle of new school far away from the safety of her nerdy friends known as the leftovers.  She is also without her wonderful boyfriend who composes songs in her honor for his band to play.

While stuck in New Hampshire, Marcie finds that to get anywhere she must walk, so when the walking turns into an enjoyable run, she find that she is losing weight.  She also get all of the long hair she used to hide behind cut off and discovers that she has become someone all together new.  Which doesn’t go unnoticed by the new boy that turns out to be one of the popular kids and the total opposite of her school life in Idaho.  With mixed feelings, she must now return to Idaho and her old life to live with her father since her mother is not quite capable of caring for her.  With some truly awkward moments, she reunites with her old friends and boyfriend that is now her ex.

There were so many emotional issues discussed in this book about divorce, learning to trust yourself, depression that, at times, it seemed like such an endurance trial that Marcie is forced to live through. She has to become the caregiver for her mother, that she can’t face the fact that she was dishonest to her boyfriend and the feelings that she has for her father even though she thinks he has destroyed his life as well as her own.  The ending nicely brings together all these complicated feelings that Marcie is having and shows how much she has grown.