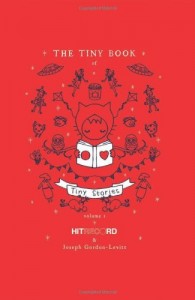 The universe is not made of atoms; it’s made of tiny stories.

The universe is not made of atoms; it’s made of tiny stories.

To create The Tiny Book of Tiny Stories: Volume 1, Joseph Gordon-Levitt, known within the hitRECord community as RegularJOE—directed thousands of collaborators to tell tiny stories through words and art. With the help of the entire creative collective, Gordon-Levitt culled, edited and curated over 8,500 contributions into this finely tuned collection of original art from 67 contributors. Reminiscent of the 6-Word Memoir series, The Tiny Book of Tiny Stories: Volume 1 brings together art and voices from around the world to unite and tell stories that defy size.

How much do I love this book? An infinite amount.

Each story is a combination of images and words all for maximum impact.  Much like Six Word Memoirs and Hemingway’s short story, this slim volume is huge with concepts.  Created by a multitude of artists, this multimedia collection is a true treasure that would make a wonderful gift for those hard to please people that generally don’t like books.  I had no idea who the mastermind is behind this wonderful compendium but looking around, I found that the he is an actor and collaborates online at RegularJoe HERE.  Sorry, if you end up spending a lot of time there, but the site is truly addicting.