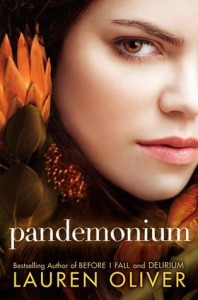 I’m pushing aside
the memory of my nightmare,
pushing aside thoughts of Alex,
pushing aside thoughts of Hana
and my old school,
push,
push,
push,
like Raven taught me to do.
The old life is dead.
But the old Lena is dead too.
I buried her.
I left her beyond a fence,
behind a wall of smoke and ?ame.
Lauren Oliver delivers an electrifying follow-up to her acclaimed New York Times bestseller, Delirium. This riveting, brilliant novel crackles with the fire of fierce defiance, forbidden

Lauren Oliver captivated readers with her first novel, the New York Times bestseller Before I Fall, a Publishers Weekly Best Book of the Year. She followed that up with Delirium, the first book in her bestselling, heart-stopping trilogy. Oliver is also the author of a luminous novel for younger readers, Liesl & Po. A graduate of the University of Chicago and NYU’s MFA program, she lives in Brooklyn, New York.

That is all this review needs is that one word.  I am amazed that I had Delirium sitting on my shelf since it first came out and didn’t pick it up until I had Pandemonium in my hands.  I admit I didn’t read Delirium until after I read Pandemonium.  Did it ruin it for me?  Nope, not one bit.  I think I might have enjoyed it a bit more but that would have been hard since I clicked instantly with the story and the characters.   So keep your slings and arrows to yourself and don’t come hunt me down for that sacrilege.  I fully repent.

Lena is barely alive, Alex is gone and most likely dead.  She finds herself in the care of a collection of revolutionaries in the Wild.  In the collective, it is all for one, one for all and there is a strong leadership in place that is making plans is trying to fight those who rule.  Although those plans aren’t fully known to Lena, she knows she is better off in the Wilds as an Invalid than in the City where everyone is in the process of being CURED for the deliria.  The story is told though alternating chapters of Lena in the Wild and then working for the Resistance.  The could have been horrible sequencing but it really did work for this story.  While working undercover for the resistance, Lena meets and saves Julian, the leader’s son and that opens up a whole new can of worms since towards the end she discovers that Alex is not quite dead.

The world of Delirium is a quite fascinating dystopian one where love is considered a disease and the only cure is to have surgery which could possibly kill or maim.  This book is a real page turner (I hate that term, but nothing else will work for this one).  It didn’t take me long at all to read it straight through since there is so much action and you felt like you were running with Lena as she is fighting for the resistance.  There are so many little twists and turns with amazing secondary characters and location descriptions that seemed to read more of a movie plot than anything else.  I am now desperately waiting for the conclusion!