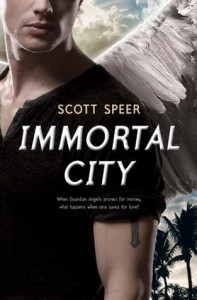 Series: Immortal City | Publication Date: April 3, 2012
Jackson Godspeed is the hottest young Angel in a city filled with them. He’s days away from becoming a full Guardian, and people around the world are already competing for the chance to be watched over by him. Everyone’s obsessed with the Angels and the lucky people they protect – everyone except for Madison Montgomery.

Maddy’s the one girl in Angel City who doesn’t breathlessly follow the Angels on TV and gossip blogs. When she meets Jackson, she doesn’t recognize him. But Jackson is instantly captivated by her, and against all odds the two fall in love.

Maddy is swiftly caught up in Jackson’s scene, a world of glamour, paparazzi – and murder. A serial killer is on the loose, leaving dead Angels’ wings for the police to find on the Walk of Fame. Even the Guardians are powerless to protect themselves in the face of this threat … and this time it’s up to Maddy to save Jackson.

Scott Speer is a music video and film director who lives in Los Angeles. Immortal City is his first book.

This story is a unique entry into the angel versus demon theme that has become so popular lately.  Told is an almost People-esqe fashion, the story combines brand name dropping with extra beautiful people as angels who aren’t quite as honorable as they should be.  The angels have made themselves known to mankind and as guardians, they now work for those who can afford their protection services.  For enough money, you can pay them to save your life.  If this all sounds not quite as altruistic as angel lore, you are correct and that is the fun part about this book:  angels that profit and are a bit bad!

The story centers around Jackson Godspeed, his ex, Vivian and the girl next door named Maddy.  Maddy is an orphan, living with her uncle and working as a waitress in his restaurant. They are broke and Maddy knows she will be lucky if she gets to go to college.  Los Angeles has been renamed as the City of Angels, literally, since this is now where they congregate.  She pays no attention to the rock star angels unlike the majority of her school mates.  When fate throw Jacks into Maddy’s life she finds herself infatuated with this immortal creature, but doesn’t fully buy into the lifestyle of the rich and famous.

Maddy finds herself in the middle of an angelic war when she herself is found be a missing link between the human and angelic worlds.  There is a war unfolding and with Maddy’s recently discovered skills and gifts, she could be the turning point in the battle.  This book was a truly happy accident that I was able to read since I really enjoyed the whole thing and now look forward to the sequel.