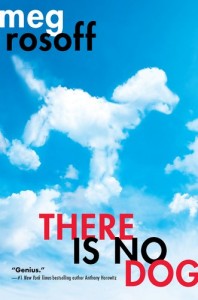 Publication Date: January 24, 2012
What if God were a teenaged boy?

In the beginning, Bob created the heavens and the earth and the beasts of the field and the creatures of the sea, and twenty-five million other species (including lots of cute girls). But mostly he prefers eating junk food and leaving his dirty clothes in a heap at the side of his bed.

Every time he falls in love, Earth erupts in natural disasters, and it’s usually Bob’s beleaguered assistant, Mr. B., who is left cleaning up the mess. So humankind is going to be very sorry indeed that Bob ever ran into a beautiful, completely irresistible girl called Lucy . . .

Bob, like most teen boys thinks about one thing and one thing only:  sex. The problem with this is that Bob has a job as GOD and he is moody, a slob and well, a teenaged boy!  He has created the earth and everything that goes with it and the earth responds to his moods with earthquakes, tsunamis and bizarre weather patterns. Especially if he forgets his running bath and well, you know what happened when it rained for 40 days.  Mr. B is his personal assistant and roommate, but in all actuality, really runs the place taking care of paperwork and responding to prayers worldwide.  Bob doesn’t really pay attention to such things except every once in awhile, so when he does happen to intercept a prayer of Lucy wishing to fall in love, all hell breaks loose.

Oh and Bob has found out that his mother got him the job as god, that and no one else really wanted it.  Mona who probably stars in the Real Housewives of the Heavens also has an insane gambling problem and has lost Bob’s pet ECK in a multi galaxy card game to Estelle’s father, a probable gangster as a featured dinner.  The ECK was my favorite little furry, penguin with an anteater nose creature ever!  He squeaks and squeals and shouts ECK!  whenever he is truly disturbed with Bob, which is quite often.  Bob and Lucy really connect over the Eck since she works in a zoo. Of course the romance doesn’t work out since Lucy will have none of Bob’s nonsense.

I just adored the tongue in check, sarcastic tone of this story.  Much like Neil Gaiman and Christopher Moore, the wittiness and fantasy are just so pleasurable that this really was a quick read for me.  I still kept hearing Joan Osborne’s song “What if God Were One of Us” while reading this.  Overall a fun and quirky read that should enable discussions about what else is out there.