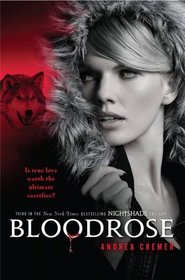 Calla has always welcomed war. But now that the final battle is upon her, there’s more at stake than fighting. There’s saving Ren, even if it incurs Shay’s wrath. There’s keeping Ansel safe, even if he’s been branded a traitor. There’s proving herself as the pack’s alpha, facing unnamable horrors, and ridding the world of the Keepers’ magic once and for all. And then there’s deciding what to do when the war ends. If Calla makes it out alive, that is. In this remarkable final installment of the Nightshade trilogy, international bestselling author Andrea Cremer crafts a dynamic novel with twists and turns that will keep you breathless until its final pages.

Andrea Cremer (www.andreacremer.com) lives in Minnesota, where she teaches at Macalester College and hangs out with her husband, pug, border collie and parakeet.

No way around it:  SPOILER ALERT

Ok, now that it is out of my system, I can try and write this review, but how to keep it spoiler free?
The conclusion of the Nightshade trilogy left me wanting more, but satisfied with the ending since I got what I wanted.  I know I don’t hold the popular position with a lot of readers since I didn’t care for Ren.  Calla drove me up the wall at times since she couldn’t make up her darn mind about which one she wanted.  For one that is supposed to be a leader, she didn’t seem able to decide one way or the other until the very end, when I guess when it was most important.  She did show some leader like skills when she force Ren and Shay to pretty much fight for her affections and keep them both from becoming liabilities.

The story starts out by setting the stage for an epic battle to be fought between the Keepers with the Guardians at their side and Calla right behind Anika.  Shay has come into his own powers both as a wolf and a mage as the Scion.  There are several trials the trio must go through in order to capture key components necessary for the group to succeed and the struggles and demons they each face will only make them stronger as a group.  There are some serious page turning moments and once you start, you won’t be able to put this book down.

You could probably hear me yelling at Ren begging him to not be so annoying and for Shay to grab that golden ring that is Calla.  Yes, there, I have said it:  Team Shay.  I fell in love with Shay’s humor and personality while thinking Ren was just a giant alpha wolf and nothing more.  There were some really interesting twists in the plot that were truly amazing.   I am still thinking about the worlds Cremer has created and can’t wait to see what she comes up with next.