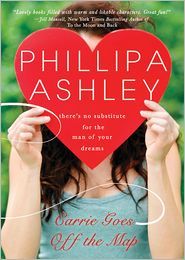 Carrie lets her best friend talk her into a scenic European road trip as the perfect getaway from a nasty breakup. Unexpectedly along for the ride is the gorgeous Matt Landor, MD, who sorely tests Carrie’s determination to give up men altogether. Careening through the English countryside, these two mismatched but perfectly attuned lonely hearts find themselves in hot pursuit of adventure and in entirely uncharted territory.

Phillipa Ashley read English language and literature at Wadham College, Oxford before working as a freelance copy-writer and journalist. Her first novel, Decent Exposure, won the 2007 RNA New Writers’ Award and became a Lifetime TV movie, The 12 Men of Christmas. She lives with her husband and daughter in Staffordshire, England.

Carrie is asked by her best friend, Rowena, what she would ever do if she caught her fiance cheating on her.   Never thinking that Huw would ever do such a thing, she makes up clever ideas about what she might do. Neither one could even imagine that he could ever cheat on her, but right before the big church wedding,  he calls it off after a ten year relationship.  Rowena rescues Carrie from their shared home and decides they need a road trip to get the bad taste out of her mouth. Everything is set to go until Rowena lands a role on a soap opera but quickly finds a replacement so that Carrie can get her mind off the horrible breakup and have a month on the road.

The replacement Rowena finds for herself is Matt.  A dashing doctor that has been working in a doctor without borders type of organization in a tropical island.  Matt has a horror that he is trying to forget himself.  He was involved in an accident and is sent home by his boss to recuperate.  Carrie meets Matt again at her ex’s wedding where she intends to disrupt it but he convinces her otherwise.  They do end up on the trip where each of them grow to like each other.  After several false starts and mixed signals between the two of them, some which are incredible funny and terribly sweet.

I love Phillipa Ashley’s writing style and her romances are so wonderfully put together, you find yourself taken away to another place with them.  Carrie is so believable and down to earth that you want to try and make her feel better after her horrible relationship.  You just know that Matt with his damaged background and playboy ways will come around to find Carrie “the one”.  I so enjoy these romances since they really have a perfect balance of humor with interesting characters and dialog.  Now, I am patiently waiting for Ashley to write me another story.