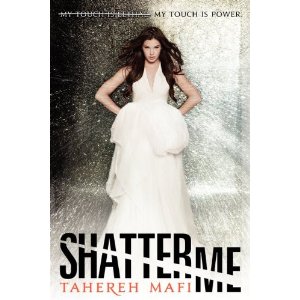 The last time she did, it was an accident, but The Reestablishment locked her up for murder. No one knows why Juliette’s touch is fatal. As long as she doesn’t hurt anyone else, no one really cares. The world is too busy crumbling to pieces to pay attention to a 17-year-old girl. Diseases are destroying the population, food is hard to find, birds don’t fly anymore, and the clouds are the wrong color.

The Reestablishment said their way was the only way to fix things, so they threw Juliette in a cell. Now so many people are dead that the survivors are whispering war– and The Reestablishment has changed its mind. Maybe Juliette is more than a tortured soul stuffed into a poisonous body. Maybe she’s exactly what they need right now.

Juliette has to make a choice: Be a weapon. Or be a warrior.

In this electrifying debut, Tahereh Mafi presents a world as riveting as The Hunger Games and a superhero story as thrilling as The X-Men. Full of pulse-pounding romance, intoxicating villainy, and high-stakes choices, Shatter Me is a fresh and original dystopian novel—with a paranormal twist—that will leave readers anxiously awaiting its sequel.

Tahereh Mafi is a girl. She’s 24. She writes books and reads books and drinks way too much coffee. SHATTER ME is her first novel, and the first of a trilogy, coming from Harper/HarperCollins on November 15, 2011. Film rights have been optioned by 20th Century Fox.

MY THOUGHTS
ABSOLUTELY ADORED IT, LOVED IT, WANT MORE

***one slight spoiler — highlight to read***

Juliette wants desperately to be an ordinary girl, instead she feels she is a murderous monster.  After trying to comfort a small child by picking him, he dies a horrible death from her touch.  The world she lives in has been destroyed by too many chemicals, overpopulation and disease causing people to abandon society, and so a dictator named Warner has been elected to run what is left of the country.  The army keeps complete control over the citizens keeping them starving, poor and with little or no medical care.  There are factions that see through the plans of The Reestablishment and want to overthrow the current status quo.

When I first picked up this book, I had no idea what it was about.  I had heard the online buzz about it and started following the author on twitter and her blog and fell in love with her use of words and humor.  I thought that if she writes half as good as she tweets and blogs, then I would be in store for a real treat!  And I was.  I was in tears by page nine and by the end of the book I was laughing.  What makes a solid hit for me, is exactly that ability in an author to make me feel emotions both good and bad and I was dragged around quite a bit with Mafi’s debut.  She made me care deeply about Juliette and want her to actually live a fulfilling life that seemed literally out of reach for her.  Her romantic foil of Adam was a perfect match in both strength and caring that had developed in their childhood..

There is also quite a bit of comic relief and Kenji, a fellow soldier with Adam is flat out funny.  Some of his one liners seem like bad come ons, but they never failed to make me giggle.  Adam is just the sweetest guy once you get past his killing machine exterior.  Warner, the chief bad guy and dictator dude was pretty comical as well and definitely drawn from some all time comic book villains.  I know you have probably heard around the web the comparisons to X Men, but that is only the end of the book and to me only a way to set up the next book.  I think these characters have the beginnings of depth you wouldn’t find in ordinary comics.

Seriously, why am I writing so much when I try to keep my reviews to two paragraphs?  Because you really, really need to read the amazing combinations of letters and words Mafi comes up with.  The writing is just gorgeous and almost poetic.  It just flows — sigh — perfectly.  OH, now I bet I have to wait a year for the follow up….please write faster! Plus, she proves that there is intelligent life in the OC.

WANT TO WIN THIS BOOK (ARC)?

Check out my YA blog HERE