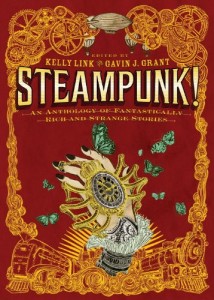 Imagine an altrnate universe where romance and technology reign. Where tinkerers and dreamers craft and re-craft a world of automatons, clockworks, calculating machines, and other marvels that never were. Where scientists and schoolgirls, fair folk and Romans, intergalactic bandits, utopian revolutionaries, and intrepid orphans solve crimes, escape from monstrous predicaments, consult oracles, and hover over volcanoes in steam-powered airships. Here, fourteen masters of speculative fiction, including two graphic storytellers, embrace the genre’s established themes and refashion them in surprising ways and settings as diverse as Appalachia, Ancient Rome, future Australia, and alternate California. Visionaries Kelly Link and Gavin J. Grant have invited all-new explorations and expansions, taking a genre already rich, strange, and inventive in the extreme and challenging contributors to remake it from the ground up. The result is an anthology that defies the genre even as it defines it.

Kelly Link and Gavin J. Grant started a zine, founded an independent publishing house, own two letterpresses, and edited the fantasy half of The Year’s Best Fantasy & Horror for five years.

Kelly Link is the author of three acclaimed short story collections and a collection for young adults. Her stories have appeared in several anthologies, including The Restless Dead and have won the Hugo, Nebula, Locus, Tiptree, British Science Fiction, and World Fantasy Awards.

Born in Scotland, Gavin J. Grant moved to the U.S. in 1991. He has written for the Los Angeles Times, Bookslut, and Time Out New York , is still a zine reviewer for Xerography Debt, and has published stories in several literary magazines.

SOURCE:  AMAZON VINE
MY THOUGHTS
LOVED IT, SOME STORIES MORE THAN OTHERS

This book is a compendium of stories by some of my favorite authors.  Each ones is a complete story in just a few pages, but a few of them, I would really liked to see developed further.  There are also several manga-type stories that are incredibly well done.  I have recently become fascinated by manga and would love afford more of them.  I am going to hit on a few of the stand outs here:

Some Fortunate Future Day by Cassandra Clare – This is the perfect story to lead off the collection since it captures her at times, creepy writing style wonderfully.  It centers around Rose and her strange clockworking father who goes off to war and leaves in the care of robots he has created. Her doll, Ellen, tells her exactly what she doesn’t want to hear and and a time changing device controls her destiny.

Seven Days Beset by Demons by Shawn Craig –  Wonderfully imaginative and weird, this manga covers the seven deadly sins over the course of seven day through the eyes of a mechanical music box maker.

Finishing School by Kathleen Jennings – This illustrated short story ends with a beginning that should really be continued.  It is a story about how two girls meet up with a mechanics expert who takes on extraordinary adventures.


Everything Amiable and Obliging by Holly Black – Who would have thought that there is a steamy underside to clockwork automatons?  Only Holly Black could imagine this world.

All of the stories in this collect merit reading a few times and this would make an excellent gift for those who enjoy a bit of weird sci fi.