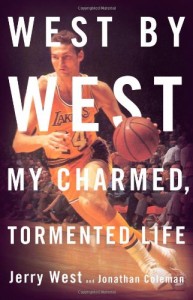 He is one of basketball’s towering figures: “Mr. Clutch,” who mesmerized his opponents and fans. The coach who began the Lakers’ resurgence in the 1970s. The general manager who helped bring “Showtime” to Los Angeles, creating a championship-winning force that continues to this day.

Now, for the first time, the legendary Jerry West tells his story-from his tough childhood in West Virginia, to his unbelievable college success at West Virginia University, his 40-year career with the Los Angeles Lakers, and his relationships with NBA legends like Bill Russell, Wilt Chamberlain, Kareem Abdul-Jabbar, Magic Johnson, Shaquille O’Neal, and Kobe Bryant. Unsparing in its self-assessment and honesty, WEST BY WEST is far more than a sports memoir: it is a profound confession and a magnificent inspiration.

Jerry West is widely regarded as one of the greatest basketball players of all time. After retiring from the Los Angeles Lakers in 1974, West went on to lead the team– first as a coach, and then as the general manager. He lives in California and West Virginia.

Jonathan Coleman is the bestselling author of Exit the Rainmaker, At Mother’s Request, and Long Way to Go. He is a former producer and correspondent with CBS News.He lives in Charlottesville, Virginia.

You don’t need to be a basketball fan to enjoy this wonderfully honest memoir from Jerry West with his co-author Jonathan Coleman.  If you are a basketball fan, then this book is a must have and it doesn’t matter which team you follow. Growing up in the Los Angeles area during West’s tenure with the LA Lakers, you couldn’t avoid cheering for the team, so this book with inside look at the Lakers is just wonderful.  West really pulls the covers off of his own life and opens up about the abuse he suffered as a child and the depression that stayed with him through out his life.  There are parts in the book that are truly wrenching.  I can understand why his family didn’t want much of this story printed since it probably opened up a lot of wounds.

Contest is open to anyone over 18 years old with a reliable US or Canadian mailing address
(sorry, No PO Boxes)
This ends 11.6.11 midnight Pacific Time and the winner will be chosen by Random.org on 11.7.11.
Winner will have 48 hours to respond to email or a new winner will be chosen
This giveaway is sponsored by LITTLE BROWN for THREE WINNERS.

Complete the form below!
Follow Me
+1 Leave a comment once daily with an email address
+1 Be my friend on GoodReads HERE