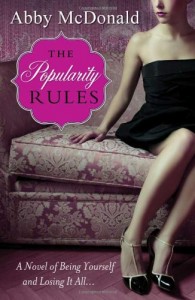 The meek don’t inherit a thing. Nice girls win nothing but regret. Virtue is wholly overrated.
If you don’t do it, some other girl will.
Kat Elliot has spent her life fighting against phony schmoozing-and it’s led her nowhere. A rebellious music journalist, Kat is down on her dreams when her ex–best friend Lauren swishes back into town. Ten years ago, Lauren dumped Kat for high school gold: popularity. Now Lauren wants to make amends by teaching Kat the secret to her success: The Popularity Rules, a decades-old rule book that transformed Lauren that fateful summer.
Broke and desperate, Kat reluctantly agrees to a total makeover-what does she have to lose? She’s gotten nowhere on her own. Maybe becoming someone new is just what she needs.

Twenty-six-year-old Abby McDonald grew up in Sussex, England, and studied politics, philosophy, and economics at Oxford University. She began writing at college, becoming music editor of The Oxford Student and completing her first novel. She has since worked as a music journalist and entertainment critic, interviewing acts as diverse as LeAnn Rimes, Kings of Leon, and Marilyn Manson. Her writing has appeared in the NME, Plan B magazine, CosmoGirl!, and a variety of websites and blogs. She is the author of The Liberation of Alice Love and three books for teens: Sophomore Switch; Boys, Bears & A Serious Pair of Hiking Boots; and The Anti-Prom. You can find her online at www.abbymcdonald.com and twitter.com/abbymcdonald.

MY THOUGHT
LOVED IT

Kat looses her music journalist job just as her former BFF from high school returns to her life.  What Kat doesn’t know is that Lauren had dumped her as a friend when she discovered a book called The Popularity Rules much like those *RULES* books on how to get a guy.  Now, Lauren is back to make amends and help Kat discover her inner popularity.  Each chapter starts with a bit of wisdom from the book.  Kat goes through an extreme makeover of personality, career and appearance which help propel her into a whole new lifestyle.  The chapters headings are actually pieces of advice which might really work, but I imagine that they are a bit sarcastic at the same time.  There are some real gems mixed in the snark like: Chapter 33 “Like it or not, nothing stays the same, and neither should you.”

After a bit of research, I found that this is the author’s second book and first adult story.  Kat and Lauren both seem stuck in their teen years when they ultimately discover that you must remain true to yourself to be happy.  Overall, the story will leave you feeling good and you might even try a few of the rules yourself.  I really wonder if the chapter headings are part of some actual book on popularity.   I really enjoyed this one and it is a super pick me up story that should appeal to those who love Rachel Johnson and Jane Green.