Do you have another book in the works?
Sort of. I am currently playing around with ideas for a second
Egyptian novel which takes place hundreds of years after the events of
‘Asenath.’ I have actually written a very rough draft, and needless to
say, it is far from publishability.

What are you reading right now?
Eloise Jarvis McGraw’s little-known novel ‘Pharaoh.’ (Her most famous
work is ‘Mara, Daughter of the Nile.’)

How many books a year do you read?
Uh…. I really have no idea! Lots.

What does your dog like to do while you write or read?
Chestnut is a weird dog – when I am paying attention to her, she
doesn’t mind me. Yet when I sit down with the laptop in the patio, she
begins begging for attention – sniffing my toes, prodding me with her
long pointed nose, brushing against me. After a while though, she will
either go off and do her own thing (exploring and hunting around the
garden) or sit by my feet….
….And then when I finally turn my attention back to her, she runs away! Haha.

What is your dog’s favorite activity?
Exploring, hunting, and eating. She’s actually a bit hefty now.
Dachshunds are prone to quick weight gain because of their body
structure. One time she gained so much weight her stomach was nearly
touching the floor. However, we try to make her lose weight as it
could apparently cause her backpains later on in her life.
Hunting is in her blood, so she loves exploring around the garden,
looking for little animals to scare away. The birds don’t even fly
down to the ground anymore, probably because they all know that a
hunter dog lives there.
Chestnut often comes to me bringing twigs, leaves, branches – and one
time, she even found old bones that the older dogs buried long ago!
She’s an amazing one, that dog. 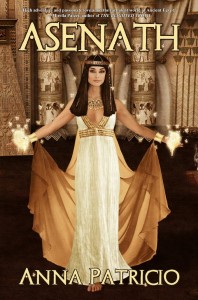 In a humble fishing village on the shores of the Nile lives Asenath, a
fisherman’s daughter who has everything she could want. Until her
perfect world is shattered.

When a warring jungle tribe ransacks the village and kidnaps her,
separating her from her parents, she is forced to live as a slave. And
she begins a journey that will culminate in the meeting of a handsome
and kind steward named Joseph.

Like her, Joseph was taken away from his home, and it is in him that
Asenath comes to find solace…and love. But just as they are beginning
to form a bond, Joseph is betrayed by his master’s wife and thrown
into prison.

Is Asenath doomed to a lifetime of losing everything and everyone she loves?

Anna Patricio is a lover of ancient history, with a particular
interest in Egypt, Israel, Greece, and Rome. She is also intrigued by
the Ancient Near East, though she has not delved too much into it but
hopes to one day.

She undertook formal studies in Ancient History at Macquarie
University. She focused mostly on Egyptology and Jewish-Christian
Studies, alongside a couple of Greco-Roman units, and one on
Archaeology. Though she knew there were very limited job openings for
ancient history graduates, she pursued her degree anyway as it was
something she had always been passionate about.

Then, about a year after her graduation, the idea to tackle historical
fiction appeared in her head, and she began happily pounding away on
her laptop. ASENATH is her first novel.

Recently, she traveled to Lower Egypt (specifically Cairo and the
Sinai), Israel, and Jordan. She plans to return to Egypt soon, and see
more of it. In the past, she has also been to Athens and Rome.

Anna is currently working on a second novel, which still takes place
in Ancient Egypt, but hundreds of years after ASENATH.