Linda’s Famed Artichoke Dip
By Linda Evans,
Author of Recipes For Life: My Memories
I’ve been making my artichoke dip for years. Practically everyone who has ever tasted it has asked me for the recipe. It’s perfect for large parties or for smaller, intimate gatherings. Or when your husband’s ex-wife comes to dinner! The secret here is to use the artichoke bottoms, not the hearts. Artichoke hearts may be easier to find, they don’t produce the same results. The recipe easily doubles or triples for large gatherings. You can also replace the artichokes with 7 ounces of lump crab meat for a delicious variation.
MAKES 6 SERVINGS
1 (8-ounce) package cream cheese, at room temperature
½ cup mayonnaise
1 teaspoon Tabasco (or more, to taste)
1½ tablespoons thinly sliced scallions (white part only)
½ cup grated Parmesan cheese (I prefer Parmigiano-Reggiano)
1 (13¾ ounce) can artichoke bottoms (not hearts), drained and finely diced
Preheat oven to 350°F.
With an electric mixer, beat the cream cheese with the mayonnaise. One by one, blend in the Tabasco sauce, scallions, and Parmesan.
Using a rubber spatula or wooden spoon, fold in the artichokes (don’t use the mixer for this).
Spoon the mixture into a 3-cup baking dish and bake for 30 minutes, or until golden brown. Serve warm with crackers.

The above is an excerpt from the book Recipes For Life: My Memories by Linda Evans. The above excerpt is a digitally scanned reproduction of text from print. Although this excerpt has been proofread, occasional errors may appear due to the scanning process. Please refer to the finished book for accuracy.
Copyright © 2011 Linda Evans, author of Recipes For Life: My Memories 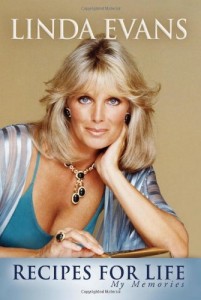 Author Bio
Linda Evans, author of Recipes for Life: My Memories, is an award-winning actress who has personified beauty and grace to American television viewers for over five decades, from her role as Audra Barkley on The Big Valley, to the glamorous Krystle Carrington on Dynasty, to Hell’s Kitchen, which she won in 2009 in London, England. She has won the Golden Globe Award for Best Actress in a Television Drama series and has won five People’s Choice Awards for Best Female Performer. Linda was also nominated for an Emmy Award for Outstanding Lead Actress in a Drama Series. For her contribution to the television industry, Linda has a star on the Hollywood Walk of Fame.
After Dynasty, Linda moved from Hollywood to the Pacific Northwest, where she began an extraordinary journey of self-discovery. She has returned to performing frequently, starring in the stage play, Legends, and winning the Hell’s Kitchen competition while working under Michelin-starred chef Marco Pierre White.
Linda’s often lavish and luxurious life has rivaled Krystle Carrington’s. She has dined with queens and presidents, been romanced by the rich and famous, and today, what Linda treasures most is the wisdom she has gained along the way.Linda lives in Rainier, Washington.
For more information please visit http://lindaevansofficial.com, and follow the author on Facebook