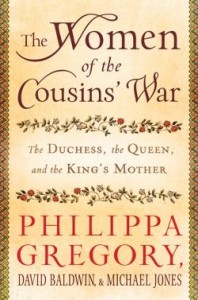 #1 New York Times bestselling author Philippa Gregory teams with two eminent historians to explore the historical characters in the real-life world behind her Wars of the Roses novels. PHILIPPA GREGORY and her fellow historians describe the extraordinary lives of the heroines of her Cousins’ War books: Jacquetta, Duchess of Bedford; Elizabeth Woodville, wife of Edward IV; and Margaret Beaufort, mother of Henry VII.
In her essay on Jacquetta, Philippa Gregory uses original documents, archaeology, and histories of myth and witchcraft to create the first-ever biography of the young duchess who survived two reigns and two wars to become the first lady at two rival courts. David Baldwin, established authority on the Wars of the Roses, tells the story of Elizabeth Woodville, the first commoner to marry a king of England for love; and Michael Jones, fellow of the Royal Historical Society, writes of Margaret Beaufort, the almost-unknown matriarch of the House of Tudor.
In the introduction, Gregory writes revealingly about the differences between history and historical fiction. How much of a role does speculation play in writing each? How much fiction and how much fact should there be in a historical novel? How are female historians changing our view of women in history?
The Women of the Cousins’ War is beautifully illustrated with rare portraits and source materials. As well as offering fascinating insights into the inspirations behind Philippa Gregory’s fiction, it will appeal to all with an interest in this period.

Philippa Gregory is the author of several bestselling novels, including The Other Boleyn Girl, and is a recognized authority on women’s history. She studied history at the University of Sussex and received a Ph.D. at the University of Edinburgh. She welcomes visitors to her website, www.philippagregory.com.

David Baldwin taught history at the Universities of Leicester and Nottingham for many years, and is the author of four books dealing with people and events of the Wars of the Roses, including the acclaimed Elizabeth Woodville, Mother of the Princes in the Tower.

Michael Jones did his Ph.D. on the Beaufort family, and subsequently taught at the University of South West England, the University of Glasgow, and Winchester College.  He is a Fellow of the Royal Historical Society and now works as a writer and media presenter.  He is the author of six books, including The King’s Mother, a highly praised biography of Margaret Beaufort, which was shortlisted for the Whitfield Prize.

This book is an excellent companion piece to the series of books about the women who probably had more to do with the Tudor dynasty than they are given credit for.  The book is broken into three parts, each written by a different author to give a place in history to these fascinating women.  The wonderful  introduction by Gregory explains that women were very rarely mentioned and record keeping about them, is spotty at best.   By piecing together historical documents, letters and conjecture, it is possible to recreate the importance these women had in the history of the ruling class.

The first section written by Gregory sparkles with her familiar style of bringing history to life and covers Jaquetta, the Duchess of Bedford and her rise in English Royalty.  The next section written by Baldwin details the ascent of Elizabeth Woodville answers many questions about her life, but it lacked a bit in the sparkle department.  The last section, written by Jones, reveals Margaret Beaufort, who I disliked in The Red Queen, but now understand a bit better.  This is a must read for anyone that wants a better understanding of the lives of these women.