I received a nice note from Justin about this wonderful project.
From Justin:
Given that Banned Books Week is here and that you’re one of the bloggers taking part in the Banned Books Week blog hop, I thought you and your readers might be interested in something we’re working on called the Uprise Books Project. We’re a newly formed organization dedicated to ending the cycle of poverty through literacy, providing new banned and challenged books to underprivileged teens free of charge. In a nutshell (and the slightly more detailed summary is below), lower-income middle/high school students will be able to select banned and challenged books on our site and we’ll solicit donations from contributors willing to fulfill their requests.

If you have a few minutes, you might take a look at the article the Portland Mercury wrote about us this week (http://www.portlandmercury.com/portland/the-uprise-books-project/Content?oid=4747266), my interview on the Portland State University’s Impact Entrepreneurs blog (http://psusii.wordpress.com/2011/09/21/interview-with-justin-stanley-founder-of-uprise-books/), and, of course, our Kickstarter campaign (http://www.UpriseBooks.org/ks). I’d be happy to answer any questions you might have any time. 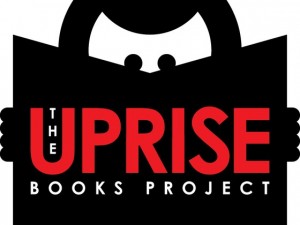 The Uprise Books Project is about getting banned and challenged books to teens throughout the United States. Or, rather, it will be… once our site is finished. That’s sorta where this Kickstarter campaign comes in. We need you, concerned and generous Internet friends, to help cover the cost of designing and developing the website we’ll use to get those books out.
When we’re through, kids throughout the country will be able to use the site to browse through a selection of books that have been banned and/or challenged somewhere in the United States and add the ones that interest them to their personal Wish Lists. As long as they’re between the ages of 13 and 18 and meet the income requirements, we’ll do our best to fulfill their requests.
At the same time, folks concerned about little things like poverty, literacy and censorship will be able to search through some basic demographic data to find books  they’d like to sponsor. For example, donors could contribute towards requests for particular banned books that touched them when they were younger, or books that were challenged because of specific content (racism, homosexuality, etc.). Others might be interested in requests from specific states. Doesn’t matter. We’ll make it easy to give in a ways that are meaningful to them.

OK, but why banned and challenged books?

Two reasons. First, we simply don’t believe in censorship. As the American Library Association says, “Constitutionally protected speech cannot be suppressed solely to protect children or young adults from ideas or images a legislative body believes to be unsuitable for them.” We think that parents have a right and an obligation to monitor their own child’s access to literature they feel might be inappropriate, but they can’t control another child’s access. By banning and challenging books in schools and libraries, though, they do just that.
Second, and most importantly, we think that the idea that these texts have been banned and challenged might motivate these kids to actually read the things. A sixteen-year-old boy might not care that the Radcliffe Publishing Course called The Great Gatsby the best novel of the 20th century, but his inherent teen sense of rebellion might entice him to pick up a book challenged because of its “language and sexual references.”

Sounds awesome, but why can’t you just use

Don’t get us wrong. We love open source software, and we’re big fans of WordPress and Drupal. In fact, we’re going to build a WordPress-driven site to spread information about the cause until the fully armed and operational version is ready, and we’ll likely use a heavily customized Drupal install as the backbone of the Real Site. But…
Using existing plugins (and this seems to be the case whether we’re talking about WordPress, Drupal, Joomla, etc.), we can kludge together the some of the functionality that we need, but we’d end up stuck with slow manual processes that are prone to human error and don’t scale to meet the needs of the huge number of kids we hope to serve. The site you’re helping to develop will be capable of helping more kids get books, period. And with the site running on autopilot, we’ll have more time to focus on fundraising, outreach, educational efforts, etc.
Also, the $10k goal is a little misleading. Yes, we could easily spend that amount on design and custom coding to get as much of our dream functionality as possible, but even if we reach our current goal, we won’t see the full amount. Kickstarter keeps a percentage (5%), Amazon gets a cut (3-5%)… and that doesn’t include the costs associated with the awesome rewards you’ll get for contributing (printing, shipping, etc.).

And let’s face it. To say we have the design skills of blind, drunk chimps is an insult to inebriated primates everywhere. Seriously. If we tried to design something ourselves, we’d end up with a site that looked like this: 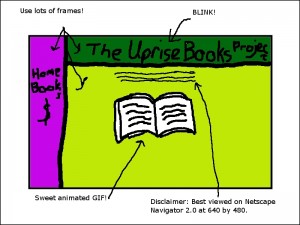 And our coding skills aren’t much better… We need the help of professional developers who can make this better/stronger/faster.

We’re pretty excited about the rewards we’re able to offer in this campaign, thanks in no small part to some people who’ve proven they’re just as interested in this cause as we are.
For example, we’ve partnered with some incredible artists who are creating original, banned book-inspired pieces just for this project. For as little as a $25 contribution, you can have your choice of one of the prints being created RIGHT NOW by Robin Kaplan, hopskotch SunDAY, Dane Ault and Ryan Pollard. We’ll post updates here as the works come together, but you can check out each of their individual sites to find out why we’re so excited to have them on board. We can’t wait to see what they come up with.
We have a few very cool limited rewards, too. The first 10 people who make $35+ contributions will also receive a copy of Mike Russell’s book, The Sabertooth Vampire: The Complete First Season. And our friends at Doubleday Press  and ThinkGeek have kicked in a few items for the first three $200+ donors to fight over.  (First come, first serve one those. Kickstarter’s terms of service ruled out the Thunderdome.)
And of course, everyone who pitches in at least $5 will be recognized on the very Uprise Books Project website they helped turn into a reality.