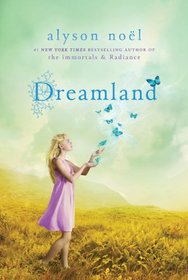 Riley’s finding that the afterlife can be a lonely place when all you do is focus on work. So she goes to the place where dreams happen, hoping to find a way to contact her sister, Ever. She meets the director, who tells her about the two ways to send dreams. As a Dream Jumper, a person can jump into a dreamer’s dream, share a message, and participate. As a Dreamweaver, an entire dream can be created in a studio and sent to the dreamer. But Dreamweaving was outlawed decades ago, and the studio was boarded up. Thinking it’s her only way to reach out to her sister, Riley goes in search of the old studio. There she finds a ghost boy, who’s been creating and sending nightmares to people for years. In order to stop him and reach out to Ever, Riley is going to have to confront and overcome her own fears.

Alyson Noël is the #1 New York Times bestselling, award-winning author of Faking 19, Art Geeks and Prom Queens, Laguna Cove, Fly Me to the Moon, Kiss & Blog, Saving Zoë, Cruel Summer, and The Immortals series including Evermore, Blue Moon, Shadowland, Dark Flame, and Night Star, as well as the Immortals spin-off series beginning with Radiance. With over 2 million copies in print in the US alone, her books have been published in 35 countries and have won awards including the National Reader’s Choice Award, NYLA Book of Winter Award, NYPL Stuff for the Teenage, TeenReads Best Books of 2007, and Reviewer’s Choice 2007 Top Ten, and have been chosen for the CBS Early Show’s “Give the Gift of Reading” segment, and selected for Seventeen Magazine’s “Hot List” and Beach Book Club Pick. She lives in Laguna Beach, California.

Riley Bloom has a habit of overstepping boundaries, finding herself in places she doesn’t belong or shouldn’t be.  None of that has stopped her before and in the third installment of Riley’s adventures in the Here and Now, she finds herself trying to reach out to her sister, Ever.  She desperately craves becoming a teen and wishes she still had Ever in her life to guide her and offer advice. In some ways, Riley has matured incredibly, yet she still thinks impulsively, acts without thinking things through and speaks exactly what is on her mind.  Not bad traits, but all together, they tend to push people away.  Slowly, Riley is finding her place in the after life.

This series is really special and I love recommending it to younger readers.  It hits on a lot of topics like self acceptance, the ability to learn from your mistakes, as well as the important concept of maturity.  I loved the fact that Riley realizes her mistakes and learns from them.  She finds herself drawn to Dreamland, a place where people can connect with the earth bound and finds her wishing she can communicated and get advice from his sister.  She is still craving that all important birthday to become a teenager.  She accidentally wanders into Dreamland, which she is told to avoid, and finds a hurt boy that really needs help letting go of that hurt, but finds her temper gets the best of her in trying to help him.  I really can’t wait until the next installment.