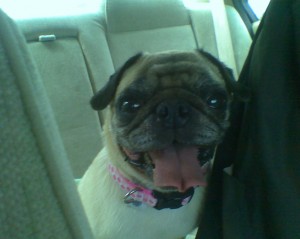 Pig has this name because of all the weird noises she makes.

Do you have another book in the works?
My debut erotic romance novel, Where The Rebel Flag Still Waves (historical/paranormal) is being published by Rebel Ink Press. It’s due out in winter 2012 and is set in the 1860’s. It’s about an outlaw who is tormented by his dark past and being haunted by a demon who wants to make his life hell and wants him as his blood mate.
This outlaw falls in love with a Southern belle, but must hide his affection from her and the demon who haunts him.
Things get more complicated when a were-lion also falls for the woman and is determined to claim her as his mate.
This book is the first in my Legends Of Love Series. The historical aspect is thoroughly researched, but being the odd one I am, I had to throw in some good old paranormal elements.
Some of the graphic content includes: Explicit M/F sex, forced seduction, M/F/M menage, M/M elements, spanking, anal sex and light bondage.
What are you reading right now?
Right now I have this delightful list of books I’m trying to choose from to read next.
How many books a year do you read?
Oh, my. I’m not really sure.
What does your dog like to do while you write or read?
She usually curls up next to me and sleeps, but sometimes she will put her paws on the couch and stare at me, wiggling her tail and looking cute until I pet her. Who can resist that?
What is your dog’s favorite activity?
Eating hands down. Sometimes she takes her paw and swats her food so it goes all over the kitchen. Her tail wiggles while she does it, so I know it’s fun for her. She also loves to play tug o’ war and makes all sorts of comical noises while fighting for her victory.