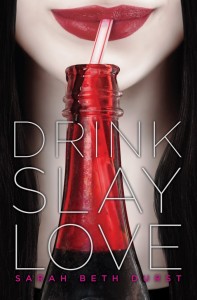 Pearl is your typical sixteen-year-old vampire—until the night a unicorn stabs her through the heart with his horn. Oops. Now she’s experiencing a number of alarming symptoms: noticing her own reflection, feeling sympathy for a human victim, and being able to withstand the sun. Pearl’s immunity to sunlight thrills her family, who enroll her in high school so she can lure home tasty friends. Pearl quickly discovers that high school is very similar to vampire culture with its rigid rules, clear social hierarchy, and a might-makes-right attitude. But having a conscience makes it hard to cope with an evil plot the Vampire King has in store for the local humans. Will Pearl overcome her bloodsucking instincts in favor of her newly acquired conscience? This acerbic antidote to other vampire romances is rife with gorgeous vampires, handsome were-unicorns, high school drama, and lots of action!

Sarah Beth Durst is the author of the young adult novels Enchanted Ivy and Ice, as well as the middle grade novels Into the Wild and Out of the Wild. She has twice been a finalist for SWFA’s Andre Norton Award, for both Ice and Into the Wild. Sarah lives in Stony Brook, New York, with her husband and children. Visit her at sarahbethdurst.com.

Rose is more concerned with beating the heck out of her boyfriend Jadrien, getting her food high by sucking down the blood from the guy who works at an ice cream shop and doing whatever her “parents” tell her to do.  One day, she is attacked by a beast and left to die and since Pearl is a vampire, she is pretty much toast (literally!), if left in the sun.   Something strange has happened and Pearl wakes up in the sun on her doorstep.  I would say hilarity ensues, but not so much, since she thinks her life is pretty much over, especially when her parents decide that she should attend the local high school.  As Pearl tries to uncover the beast who has ruined her life, she finds more than she bargained for and finds that humans aren’t just a food source.

The beast turns out to be a unicorn and unicorns are one of the few creatures that can kill a vampire, so what went wrong or right in this case?  Well, I can’t tell you that because then I would have to kill you.  The story really comes together while her family is planning a Fealty Ceremony for the Vampire King where they plan to feast on the local students.  As the plot unfurls, Pearl finds she is gaining a conscious and doesn’t want to see her new friends harmed.  Pearl is probably one of the snarkiest characters to grace a page in my recent memory.  She has a sharp tongue as well as teeth.

Finally, an author brought together some of my favorite things in one story.  After reading Unicorns VS Zombies, I was really in the mood for more unicorns, so when I was lurking around Amazon and this popped up, I was beyond thrilled!  Sarah Beth Durst has taken a vampire story to a whole new snarky level.  I was reminded a bit of MaryJanice Davidson’s Queen Betsy, but with less shoes.  I really hope that this will be a series since I would love to read more about Pearl.

WANT TO WIN A COPY OF THIS BOOK?  Head on over to BOOKHOUNDS YA! (here)