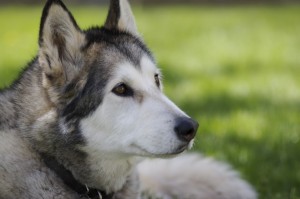 Sequoia is the dog that I wrote my book, Plucking Wolf Fur, about, but she passed away a couple years ago. I have not gotten a new dog but have been seriously thinking about it in recent months. Sequoia was my soul mate, and I have not been able to find a place in my heart for a new dog. I do have a cat, however. Sequoia and Phoenix were great friends.
Do you have another book in the works?
No. I have a couple of ideas but nothing that I have started. I really like Erik Larson and his ability to combine fiction elements and creative non-fiction. I would like to start a similar project in the next six months.
What are you reading right now?
The Paris Wife by Paula McLain. It’s about Ernest Hemingway’s first wife and the time they spent together in Paris. It’s a novel.
How many books a year do you read?
40 to 50
What did your dog like to do while you write or read?
Sequoia was not needy. When I wrote in my office, she might come in and say hello for a minute or two and wander back into the main part of the house. She was stoic and often spent time alone. When I read at night on the couch, she would often rest on the other side of the room and watch me. I think she wondered why I spent so much time staring at a book.
What was your dog’s favorite activity?

Sequoia’s favorite activity was hiking. When I pulled the hiking boots out of the closet, she would get a smile on her face and jump up and down. She was at home in the woods. We hiked together for hours. One time, we met a bear in the woods. We lived in Colorado and a black bear came out of the brush. Sequoia and the bear were eye to eye. They both froze, probably each just as scared as the other. Sequoia turned and walked away and the bear scrambled up a tree. I was freaked out at the time but I laugh about it now. That was just Sequoia 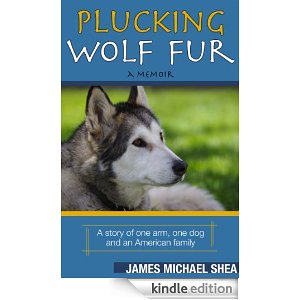 Set against the backdrop of the Western landscape, Plucking Wolf Fur tells the story of a disabled man and his 13-year friendship with a wolf-hybrid. James was born with one arm. Throughout his life, he struggled with depression and the acceptance of others. On a whim, he adopted a wolf-mixed puppy named Sequoia. The manuscript takes the reader deep into their lives together, sharing the laughs, tender moments, and adventures.

It was 1993. James was 23. He had nearly flunked out of college, and his parents were in the middle of a divorce. Adding a unique twist to the standard American story, his mom left his father for a woman, creating a new family dynamic.

James wanted a companion. He had few friends at the university and saw no future. Dogs were always important in his family, but James never thought about owning a wolf dog until he read a classified ad: “Malamute/Wolf puppies 8 @ $100.” He chose, or was chosen by, the most spirited of the bunch, one an acquaintance would later term “magic.”

Sequoia was different. She picked zucchini and garlic from the garden with her mouth, setting them in neat rows. She stole chocolate chip cookies. She survived multiple brushes with death. Most of all, she was independent and strong. As their friendship grew, James gained strength. He founded a magazine and forged a career as a newspaper reporter in the Rocky Mountains. The two were constant companions. Bound together like soul mates, they climbed 14,000-foot-mountains, traveled the country, and lived life together.

Plucking Wolf Fur is Marley and Me meets Poster Child. It demonstrates the powerful bond between an animal and a young man. Readers will learn about the challenges of living with a disability, and how Sequoia brought joy into everyone’s life.

About the author: James Michael Shea is an award-winning journalist. He has worked at New York Times- and Gannett-owned newspapers. His work has appeared on MSNBC and in the New York Times, Denver Post, Charlotte Observer and the Wall Street Journal.