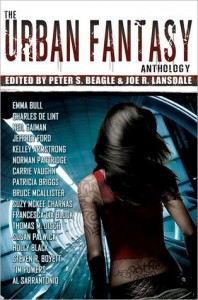 Star-studded and comprehensive, this imaginative anthology brings a myriad of modern fantasy voices under one roof. Previously difficult for readers to discover in its new modes, urban fantasy is represented here in all three of its distinct styles—playful new mythologies, sexy paranormal romances, and gritty urban noir. Whether they feature tattooed demon-hunters, angst-ridden vampires, supernatural gumshoes, or pixelated pixies, these authors—including Patricia Briggs, Neil Gaiman, and Charles de Lint—mash-up traditional fare with pop culture, creating iconic characters, conflicted moralities, and complex settings. The result is starkly original fiction that has broad-based appeal and is immensely entertaining.

Peter S. Beagle is the author of A Fine and Private Place, The Innkeeper’s Song, The Last Unicorn, The Rhinoceros Who Quoted Nietzsche, and Tamsin. He wrote the screenplays for the animated feature-film versions of The Last Unicorn and The Lord of the Rings, and is the recipient of the Mythopoeic Fantasy Award, a Hugo, and a Nebula Award. He lives in Oakland, California. Joe R. Lansdale is the author of 30 novels, including Bad Chili, The Bottoms, Lost Echoes, and Mucho Mojo, and more than 200 short stories, nonfiction articles, and comic books. His novel, Bubba Hotep, was made into a major motion picture and he is the winner of seven Bram Stoker Awards, the British Fantasy Award, and the International Horror Award. He is a writer in residence and teacher at Stephen F. Austin University. He lives in Nacogdoches, Texas.

This is one of those books that is easy to revisit.  The best part of this anthology is the introduction that appears at the beginning of each section and fully explains the sub genre in the Urban Fantasy area.  This anthology fully covers the most popular authors of the day.  I made notes next to my favorite stories.

Mythic Fiction
Introduction: “A Personal Journey into Mythic Fiction” by Charles de Lint
Emma Bull, “A Bird That Whistles”  Creepy, very creepy but told with love!
Charles de Lint, “Make a Joyful Noise”
Neil Gaiman, “The Goldfish Pool and Other Stories” This is the first story I turned to and I wasn’t disappointed in the whimsical and slightly off beat ghost story.
Jeffrey Ford, “On the Road to New Egypt”
Peter S. Beagle, “Julie’s Unicorn” – I admit I am a sucker for unicorns, who doesn’t love a good unicorn story?

Noir Fantasy
Introduction: “We Are Not a Club, but We Sometimes Share a Room” by Joe R. Lansdale
Thomas M. Disch, “The White Man”
Susan Palwick, “Gestella”
Holly Black, “The Coldest Girl in Coldtown”
Steven R. Boyett, “Talking Back to the Moon”
Joe R. Lansdale, “On the Far Side of the Cadillac Desert with Dead Folks”
Tim Powers, “The Bible Repairman”
Al Sarrantonio, “Father Dear”