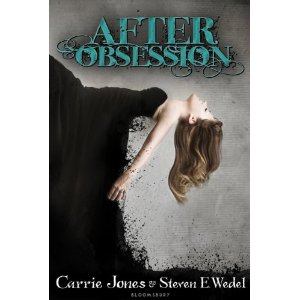 Aimee and Alan have secrets. Both teens have unusual pasts and abilities they prefer to keep hidden. But when they meet each other, in a cold Maine town, they can’t stop their secrets from spilling out. Strange things have been happening lately, and they both feel that something-or someone- is haunting them. They’re wrong. Despite their unusual history and powers, it’s neither Aimee nor Alan who is truly haunted. It’s Alan’s cousin Courtney who, in a desperate plea to find her missing father, has invited a demon into her life-and into her body. Only together can Aimee and Alan exorcise the ghost. And they have to move quickly, before it devours not just Courtney but everything around her.

Filled with heart-pounding romance, paranormal activity, and rich teen characters to love-and introducing an exciting new YA voice, Steven Wedel-this novel is exactly what Carrie Jones fans have been waiting for. Meet your next obsession.

CARRIE JONES loves Great Pyrenees dogs, Skinny Cow fudgsicles, and potatoes. In addition to the New York Times bestsellers Need and Captivate and the third book in the series, Entice, Carrie is also the author of Girl, Hero; Love (and Other Uses for Duct Tape); and Tips on Having a Gay (Ex-)Boyfriend. Carrie grew up in Bedford, New Hampshire, where she once had a séance with uber-comedian Sarah Silverman. www.carriejonesbooks.com

STEVEN WEDEL is a high school English teacher, and lives with his wife and children in Oklahoma. He has written adult fantasy novels; this is his first book for young adults.
www.stevenewedel.com

The story is told by Aimee and Alan in alternating chapters and each provide a unique voice which is made all the better by the two authors lending their talents to the story. You can easily guess which author writes the male/female perspective.  Aimee starts to notice her friend, Courtney is acting strange.  Things really get weird when Courtney’s cousin, Alan and his mother moves in with her family to help ends meet after her father dies..  Alan is searching for his American Indian roots and discovers he has a connection with the supernatural.  Aimee has a few gifts of her own, but only when Aimee and Alan meet do they began to put the pieces together in order to help Courtney and whatever is haunting her. Using his Native American ties, Alan finds the source of Courtney’s problem with Aimee’s help.  Courtney, in her quest to reconnect with her father does something that has repercussions for the whole village. Along the way, they both discover that the love in their hearts can conquer all.

I really enjoyed how the authors brought to life this seriously creepy tale based on folklore and demonic possession.  I am a huge fan of Carrie’s Need series, so this one is a natural for me.  I was really impressed with Steven Wedels and the charming voice he gives to Alan.  The alternating chapters and the collaborations between the authors just really worked for me since there is cohesive story telling through out, but each major character having a unique voice.   I am really trying to keep my comments spoiler free and it is very hard!  At parts, I felt like this was a Disney story gone wrong since there are so many dead or missing parents, but when you get into the story – that is the way it needs to be for it to work.  Demonic possession is a nice change from the normal Young Adult vampire/werewolf stories that abound and the Native American folktale that provides the basis for the story.