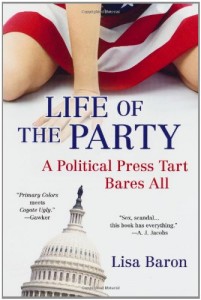 Lisa Baron is the former press and communications advisor for several nationally recognized and prominent elected officials. Best known (infamous might be a better word) for her high-profile work with Ralph Reed — the man Time magazine put on their cover under the headline: “The Right Hand of God.” She’s also an award-winning columnist, a regular television and radio contributor and a contributing writer in The New York Times bestseller Six Word Memoirs on Love and Heartbreak and Not Quite What I Was Planning.

I was expecting a political memoir, but this is much more than some funny stories strung together.  This is an in depth look at just exactly how politics and the public connect and a dishy look at that intersection in where there is  more sex and drugs than in rock and roll.   That part really took me by surprise and I never knew that politics have more groupies than NBA players.  Lisa Baron admits that she had groupie tendencies and finds herself in compromising positions but explains them as youthful indiscretions.  What is even more shocking is that these escapades take place right in the middle of the Christian Coalition.  This is the tell all I bet that group would love to be forgotten.  I adored the humor and self depreciation that the author displayed.