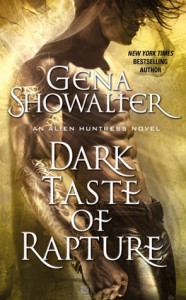 New York Times bestselling author Gena Showalter captivates with a dark, tantalizing world of humans, otherworlders, and a powerful AIR agent consumed by his desire for a woman he can never have. . . . With one caress, he can give unforgettable pleasure . . . or unending pain. . . .
Hector Dean is shaved, tattooed, and totally ripped—and he has a deadly secret. He is a walking weapon, capable of killing with a single brush of his fingertips. Little wonder he’s determined to remain on his own. But Noelle Tremain is a temptation like no other. She is beautiful and rich, with a party girl smile that hides a shocking vulnerability, and from the beginning his sizzling attraction to her is undeniable. For the first time, his stone-cold resistance is tested. But to be with her, he risks destroying her.
When a wealthy businessman is murdered in New Chicago’s seediest district, the two are partnered, and there’s no escaping what they both want: each other. Yet neither Hector nor Noelle knows what to fear more—the killer case, or their own lethal desires. . . .

GENA SHOWALTER is the New York Times and national bestselling author of more than twenty novels in a wide range of genres, including her acclaimed Alien Huntress series for Pocket Books: Awaken Me Darkly, Enslave Me Sweetly, Savor Me Slowly, Seduce the Darkness, and Ecstasy in Darkness.  Her fiction has appeared in Cosmopolitan and Seventeen and has been nominated for a prestigious RITA, as well as the National Reader’s Choice Award. She is universally acknowledged to be “made of awesome.” Visit her website at www.genashowalter.com.

The story picks up where the last Alien Huntress left off with Ava and McKell about to marry and Noelle feeling like she just lost her best friend.  Noelle wishes that she could find someone like Ava has and *shocker* shows a bit of a softer side.  Noelle and Ava have graduated from their training and are now full fledged agents for AIR.  Noelle quickly solves a case through her wits and strength and moves on to another one where alien females are being abducted to be sex slaves.  She is partnered with Hector Dean who has a bit of a past himself and closes himself off to any thoughts of love since he has a physical secret that is deadly to those he loves — or so he thinks.

Hector and Noelle have a love hate relationship and it is fun to watch them spar both mentally and physically.  The story takes a unique turn when it comes to virgins that might surprise you.  Hector makes the perfect brooding hero while Noelle’s past of growing up in luxury was not all it appears.  The case that they solve together seems like the beginning a long and positive relationship. Dallas and Jaxon, along with Mia Snow, make brief appearances throughout the book.

Wow!  I haven’t had my toes curl or wanted to skip directly to the romantic parts in a story in a long time.  Showalter really stepped up the hotness in this one.  I really felt connected with Noelle and found myself memorizing bits of her dialogue to use at those moments where you need a good comeback.  She is smart and snarky with some unpleasant truths of her own that she is hiding.  I have a special place for Showalter’s books and especially the AI series since it was the first paranormal romance that I read.  I don’t think these books need to be read in order since each one reflects on a new character, but it would probably help to keep continuity.  I also recommend going back to read her YA Alien Huntress series, Blacklisted and Red Handed.