This Q&A is reprinted from SHELFAWARENESS with permission.  See the original article HERE

W. Bruce Cameron: “A Tennis Ball in My Mouth…” 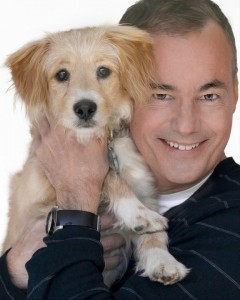 Until last year, W. Bruce Cameron was probably best known as the author of 8 Simple Rules for Dating My Teenage Daughter, which became the basis for a popular sitcom starring John Ritter in his last television role. Now, after nearly five months on the New York Times hardcover fiction bestseller list, his claim to fame may rest with A Dog’s Purpose. The inspiration for the novel came from his daughter’s work in animal rescue, and connecting with others in the field was crucial to its early success. For one book promotion, Cameron encouraged independent bookstores to sell preorders by arranging for 10% of the revenue from those sales to be donated to local animal charities. “We raised a lot of money for a lot of important charities that are doing really good work in the field of animal rescue,” he reflected, “and it put the book squarely on the radar of a lot of people involved in animal rescue.” But the novel has gone on to find a wider audience as well.
In what ways did the book’s success catch you off guard?
There’s an immense network of people involved with dog rescue for whom this is a passion. Of the fans of A Dog’s Purpose on Facebook, thousands and thousands of them are into animal rescue and welfare. In a way, this is a book that was written for them. What I did not anticipate is what we’re seeing every single day on our fan page: the number of people who say that this is a book they’re going to give to a friend because he or she lost their dog, that this is the book that you buy for a friend when their dog dies to help them with the healing process.
It’s also gotten to be very popular with children. I get emails every day from children–11, 12, 13 years old–talking about A Dog’s Purpose. I didn’t write it for children, but my slogan’s long been “I write things that you wouldn’t be ashamed to show your grandmother.” So there’s nothing in A Dog’s Purpose, I think, that anybody could object to in terms of sex or violence or profanity.
This is your first novel, but is it the first time you’ve tried to write fiction?
I’ve written novels in the past; none of them were ever published. But I’m a humorist, and a humorist is a real person who lives in a fictional world. I’ve often wondered why we call humor nonfiction, because it clearly has fictional elements. You have to come up with funny situations, and those situations are probably not going to be written exactly as they happened, if they happened at all. So I have written fiction, whether it was classified as fiction or not.
What were some of the challenges for you in writing this story, and finding this narrator’s voice?
To get into the mind of a dog, I had to walk around with a tennis ball in my mouth….
I think the difficulty for me, really, was just trying to stay true to the idea. Although I’m telling a story, and I have to use descriptive words, when it comes to the words that the dog actually understands, there are very few. This is not the kind of dog that sits there and understands everything that’s being said. He hears them–dogs have good hearing–but he doesn’t understand what they’re saying. So it’s a little disconcerting.
I had to draw up a set of rules by which I would operate, and occasionally I’d have to explain things from the dog’s point of view–and he may not understand what’s going on. He didn’t understand kissing, for example, but he understands the affection two people show when they push their faces together.
What was the point at which this story just clicked for you, and you knew you were on the right track?
This whole story and the character came to the way the best books do, which is whole cloth, almost as if someone had slipped the DVD into my brain and showed me the movie. I altered the book very little from its initial concept–it was just that whole story, the outline, that popped into my head.
At what point did you learn about The Art of Racing in the Rain? Did it set you back creatively to see another novel narrated by a dog out there?

I actually finished A Dog’s Purpose and sent it off, and we couldn’t sell it, and then I got word there was another dog novel out there, with reincarnation as a theme. So I thought, oh, great, and since we hadn’t sold it, I figured I had to move on to something else. When The Art of Racing in the Rain came out–they’re obviously different books. That dog understands English, he learned it by watching television–my reaction when I finally read it was, “Okay, this is a completely different book. We’re not competitors at all. We’re no more competitors than we were competing with Edgar Sawtelle, just because we all had dogs in our books. Most books have people in them, and that doesn’t mean that if you wrote a story about people, and another book with people in it came out, you’re out of luck. —Ron Hogan