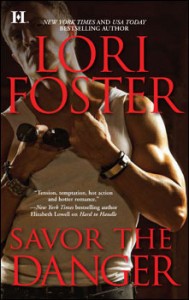 She may be aloof, and more pretty than gorgeous, but Alani Rivers is the kind of woman a hot-blooded mercenary can’t forget, no matter how hard he tries. So when Jackson Savor wakes up next to the naked, sleeping beauty—with no memory of what happened— he knows he’s been drugged…even if Alani doesn’t.After she was kidnapped, Alani vowed never to trust another man again. Still, something about this strong, sexy hero with the tender touch makes her want to believe him. As Jackson hunts down a mysterious intruder, he swears he’ll move heaven and earth to keep Alani safe. But what really happened that night? And will the truth bring them closer than they ever thought possible—or put Alani squarely in harm’s way again?

No one does romantic suspense better than Lori Foster.  This one will curl your toes, seriously.  I thought I would take this one to the beach and maybe read a few chapters.  I ended up finding shade just so I could finish it.  Even with the ocean breeze I was hot.  I didn’t read the first two in the series, but that in no way ruined this one since it was easy to pick up on Alani and her world and how it collides with Jackson Savor.  The story picks up on the sex trade and the evil behind it which is not an easy subject to take on, but Foster does an excellent job with something so unsavory.

Jackson is a man who can handle everything from romance to kicking butt and he meets his match in Alani.  Ok, so he has a thing for strays, especially cats, but I can forgive this hunk almost anything.  Alani is just as tough but has a terrible backstory and really needs the love and support she receives from Jackson even though he doesn’t realize that the relationship is what his life is lacking.  Rather than a true suspense, this one reads more like a mystery with a lot of heart stopping moments and some seriously hot romance.  I need to go back and get the rest of the series.