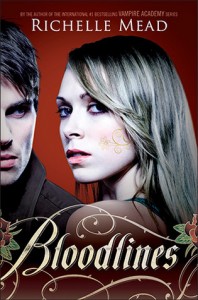 When alchemist Sydney is ordered into hiding to protect the life of Moroi princess Jill Dragomir, the last place she expects to be sent is a human private school in Palm Springs, California. But at their new school, the drama is only just beginning.

Populated with new faces as well as familiar ones, Bloodlines explores all the friendship, romance, battles and betrayals that made the #1 New York Times bestselling Vampire Academy series so addictive – this time in a part-vampire, part-human setting where the stakes are even higher and everyone’s out for blood.

Please note:  I have not read the Vampire Academy series.  I own them, but just haven’t had the time to read them yet.  I don’t know anything about the characters in that series except what the blurbs say.  This is supposed to be the adult spin off for the series, but after reading it, I think that since it mostly takes place in a private high school setting with a character just out of high school, it should probably qualify as young adult.  The whole thing reminded me a bit of 21 Jump Street, where adults infiltrate a high school to solve crime, except they are there to protect a vampire princess from being murdered.

It took me about 150 pages to really get into it.  I thought it was mostly a set up for the series to come but since I really like Richelle Mead’s humor and writing style, I stuck with it and was glad I did.  Sydney is an Alchemist and is selected to protect Jill against a plot to murder her step sister, the new vampire queen.  Sydney has done something terrible in her past and is now trying to overcome that issue (she helped a vampire — which I guess is akin to helping dirt), and with better living through chemistry she learns to blend into the high school without being too much of a nerd.  Overall, there is a lot of action towards the end of the story and I think I would read the next one in the series.  You should probably the Vampire Academy series first to really enjoy this one.  I need to start reading them.