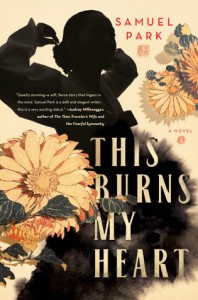 Chamara is difficult to translate from Korean to English: To stand it, to bear it, to grit your teeth and not cry out? To hold on, to wait until the worst is over? Such is the burden Samuel Park’s audacious, beautiful, and strong heroine, Soo-Ja Choi, faces in This Burns My Heart, an epic love story set in the intriguing landscape of postwar South Korea. On the eve of marriage to her weak, timid fiancé, Soo-Ja falls in love with a young medical student. But out of duty to her family and her culture she turns him away, choosing instead a world that leaves her trapped by suffocating customs. In a country torn between past and present, Soo-Ja struggles to find happiness in a loveless marriage and to carve out a successful future for her only daughter. Forced by tradition to move in with her in-laws, she must navigate the dangers of a cruel household and pay the price of choosing the wrong husband. Meanwhile, the man she truly loves remains a lurking shadow in her life, reminding her constantly of the love she could have had.
Will Soo-Ja find a way to reunite with her one true love or be forced to live out her days wondering “what if ” and begin to fully understand the meaning of chamara?
He is not just telling her to stand the pain, but giving her comfort, the power to do so. Chamara is an incantation, and if she listens to its sound, she believes that she can do it, that she will push through this sadness. And if she is strong about it, she’ll be rewarded in the end. It is a way of saying, I know, I feel it, too. This burns my heart, too.

Samuel Park is an Assistant Professor of English at Columbia College Chicago.  He is a graduate of Stanford and the University of Southern California, where he earned his doctorate in English.  He is the author of the novella “Shakespeare’s Sonnets” (Alyson Books, 2006) and the writer-director of the short film of the same name, which was an official selection of numerous domestic and international film festivals.  He currently divides his time between Chicago and Los Angeles.

Soo-Ja comes from a wealthy and traditional family in post-war South Korea and has her heart set on becoming a diplomat.  She applies and is accepted by the school, but her father tells her that no self respecting family would ever consent to allow a daughter to move to Seoul and disgrace her family, thus crushing her dreams.  She is now 22 and finishing school and is soon named an old maid when a suitor, Min,  follows her and quickly proposes.  She also meets another man, Yul, a medical student,  to whom she is instantly attracted but feels he cannot move her to Seoul and follow her diplomatic dreams.  She marries Min on the pretext that he is from a wealthy family and can take to Seoul where she can control him and follow her dreams.  Things unravel on Soo-Ja’s wedding night when Min confesses that he lied to her in order to get her to marry him.  There is no money, he is a loser and she is destined to live a traditional life while her heart breaks. Soo-Ja shows incredible strength which only seems to grow as she is abused by her in laws, where they trick her family out of money, force her to do back breaking work and almost break her spirit.

She suddenly wakes up when she runs into Yul and his wife at her hotel business and a small spark is rekindled between the two of them.  I was cheering for Soo-Ja through much of the story and I felt so emotionally connected to her that I was sad when the story ended.  Of course, I disliked Min, but overall, the tradition that controlled these characters made me understand his actions a bit better and made him a bit more sympathetic.   The relationship between Yul and Soo-Ja also made you root for them to reconnect. Yul’s wife Eun-Mee quickly becomes a match for Min in the low integrity department when she stays one step ahead of Soo-Ja and ruins Soo-Ja chances for financial prosperity by borrowing money from a friend that Soo-Ja had planned on asking.  You need to read the story to find out how it ends.

This story of reconnection and true love is a wonderful debut and I would love to read more from this author.
It reminded me of when I first read Lisa See’s work and how she combined history with incredibly believable characters and a storyline that was truly plausible.